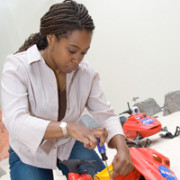 Ayanna Howard was selected as the recipient of the 2016 A. Nico Habermann Award for her sustained commitment to increasing diversity, combined with her distinction in research. She has a decades-long track record of improving access to research for women and underrepresented minorities (URMs), as well as students with disabilities. Dating back to her work at JPL in the late 1990s, she ran a mentoring program for undergraduate women and, continuing today, she works on increasing minority participation at the graduate, undergraduate, and high school levels.

Howard is currently a CRA-W board member and faculty member at Georgia Tech, where she has provided research opportunities to dozens of undergraduates (more than 75% of whom are URMs and/or women)—and a majority of these students have gone on to graduate school.

Howard has taken an increasingly visible role as a spokesperson for improving diversity in STEM and robotics, and has garnered impressive media visibility for her work. In the last year, she was recognized as one of the 23 most powerful women engineers in the world by Business Insider and was named to The Root 2015, a list of 100 African-Americans responsible for the year’s most significant moments, movements, and ideas. Additionally, Howard serves as the principal investigator of an NSF National Research Traineeship grant for Healthcare Robotics Technologies that aims to increase STEM’s appeal to a wide range of people.