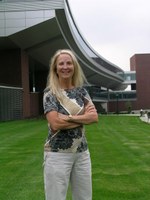 Mary Jane Irwin is the A. Robert Noll Professor in Engineering in the Department of Computer Science and Engineering at The Pennsylvania State University.  Her research and teaching interests include computer architecture, energy-aware and reliability-aware design, emerging technologies, and VLSI systems design and design automation. She has graduated more than 25 Ph.D.s during her more than 30 years on the faculty at Penn State. She was named a Fellow of The Institute of Electrical and Electronic Engineers (IEEE) in 1995, a Fellow of The Association for Computing Machinery (ACM) in 1996, was elected to the National Academy of Engineering
(NAE) in 2003, and was elected to the American Academy of Arts and Sciences in 2009. Other awards she has received include ACM’s Distinguished Service Award (2005), CRA’s Distinguished Service Award (2006), PSU’s Howard B. Palmer Faculty Mentoring Award (2006), Anita Borg Technical Leadership Award (2007), and ACM Athena Lecturer Award (2010). Janie received her M.S. (1975) and Ph.D. (1977) degrees in computer science from the University of Illinois, Urbana-Champaign.

Janie is currently serving on the CRA-W Steering Committee and was co-chair of CRA-W from 1994 to 1997.  She is also a member of the Board on Army Science and Technology (BAST), of ACM’s Fellows Selection Committee, of Microsoft Research’s External Research Advisory Board, and as Vice-Chair of NAE.s Committee on Membership.  In the past she served for six years as Editor-in-Chief of ACM.s Transactions on the Design Automation of Electronic Systems, as a founding co-Editor-in-Chief of ACM’s Journal on Emerging Technologies in Computing System, and as an elected member of the Computing Research Association’s Board of Directors, of the IEEE Computer Society’s Board of Governors, of ACM’s Council, and as Vice President of ACM.

My father was on the faculty at Memphis State (now University of Memphis) from when I was a toddler until I was a senior in high school when he accepted a Deanship in the Tennessee community college system.  So, essentially, I grew up wanting to be a university teacher like my dad.  My mother, who was an elementary school teacher (and wanted me to be as well, as that is what women did in her world), had a hard time with this at first but she eventually got used to it.   It turned out, as is often the case, that I didn’t have any real idea what faculty did…other than teach.  I guess I thought that was all they did. If you are at a research university like Penn State, teaching is just one of the many hats that you wear. Unless you have a PhD advisor who takes the time, nobody tells you about this; but you can figure it out by observing the faculty at your PhD institution. For sure, you figure it out in your first year as a faculty member!

I picked computer science because I had strong math and science skills and thought that computer science might have more promise as the “up and coming” field than mathematics. Remember, this was a long time ago … back in the days of core memories and punch cards.  I didn’t really know what computer science was, but I loved programming and was good at it. As an undergraduate I was a mathematics major since my undergraduate institution didn’t have a computer science major and I took as many programming and applied math courses as I could find.  With some good academic counseling, I might have picked electrical engineering instead. (There was no such thing as computer engineering at the time.)  But girls were just not steered that way when I was an undergraduate: engineering was for boys.  When I was considering graduate schools, I applied to and was accepted by the computer science department at the only university that was close to where my spouse had a job offer.  I didn’t know that one was supposed to apply to multiple places because acceptance wasn’t guaranteed.  This was UIUC; blind luck.

The third “unasked” part of this question is why I have spent my entire career in academia.  The best explanation I have for this came out of a recent discussion I had with one of our recent hires who gave up a very successful career in industry to join the faculty at Penn State.  He said he wanted to be a faculty for the same reason he wanted to have kids, i.e., he wanted to produce and mentor the next generation.  He claimed that this is not possible in most companies where competition is key to getting ahead. This has also been my primary reason for staying in academia.

Q: You have received many awards for your work, both in the technical and service arena. Is there any one accomplishment that stands out in your view/one that you are most proud of?

I am most proud of my offspring, both biological and academic. On the academic side this includes both my PhD students and a number of junior faculty whom I have mentored. Many of these faculty are now senior and mentoring their own set of junior faculty.  I guess that is not really one accomplishment, but many. Coming in a close second is winning the ACM Athena Lecture Award this year as I was nominated, in two independent nomination packages, by my two research communities, SIGARCH and SIGDA.  Quite an honor.

Q: What challenges have you had to overcome as a leader in the field?

Accepting the fact that I often end up getting stuck with putting together the first draft of that committee report, or the powerpoint presentation, or (ugh) the minutes.  Or maybe this is because of being one of the few, or only, women on the committee.  I used to worry about this meaning that I was being marginalized and, in part, that was true.  Several years ago at a meeting of women on campus, one of our most successful senior women faculty said to embrace this.  It means that you get to put your stamp on the report.  I have found that she is right.  Also, people remember all that hard work.

I’m senior enough now, and in enough powerful positions, that some people who never gave me the time of day before are now my “best friends”.  I really hate being suspicious of people’s motives; it’s just not my personality.  I have had to learn to try to be more careful and less trusting.  Fortunately, I have a lot of long time friends and colleagues who I know I can trust.

Q: What do you enjoy most about your career right now?

Being in the field as long as I have brings lots of history with it.  I can be sitting in a research meeting with (much) younger faculty and a bunch of (really much) younger graduate students hashing through a thorny architecture design problem and I can point the group to an old paper or idea, which none of them have seen before, related to the current problem.  Yes, the technology and applications have changed a lot, but some of the old ideas can be brushed off and spruced up with new technology and/or new applications. I also enjoy being able to bring this history to the classroom. I am teaching the first year graduate computer architecture course this fall (for the first time in a long time) and probably too often get sidetracked telling stories about the people, the evolution of the technology/products, and, sometimes, designs that went awry.  Remember the Pentium divider bug?  I do.  Remember designing logic with PLAs?  I do.  Remember the Intel 432?  I do.

I also enjoy being able to say no on occasion. When you are still building your career, you can’t afford to say no very often to that program committee invitation, to that lecture invitation, etc. I now keep track of how many such things
I’m willing to do in a semester and put a quota on my “yes’s”. That also means fewer absences from classes and having to schedule fewer substitute lecturers or make-up classes.

Q: You have chosen to be actively involved in CRA-W. What has this involvement meant to you? Do you perceive any changes, positive or negative, over your career, which have potentially been fostered by CRA-W activities?

CRA-W was, and still is, my primary connection with women in computer science and engineering – they are my women’s network.  And I love that CRA-W is an action-based organization.  I hate going to meetings where everyone complains about the way things are, but nothing concrete is really accomplished.  My normal rule of thumb now is to resign from such committees as soon as I can.  I like walking out of a meeting with an Action Plan for change and that is the way CRA-W meetings are run.  Also, CRA-W meetings have a much different “feeling” than any meeting I attend that has a majority male attendance.  At CRA-W meetings, we can and do talk “on top” of one another, back off appropriately and instinctively, and make progress – and no one is offended.  We can and do get side tracked (by shopping stories, children/grandchildren stories), then get right back to work almost seamlessly.

I think CRA-W has made an impact at the faculty levels and also is starting to make an impact at the graduate student levels.  There are more women faculty in computer science and engineering – at all levels – in the last decade or so. And more women are graduating with PhDs in computer science and engineering. The situation at the undergraduate level is depressing, but the problem is so big I don’t think that any one, small organization like CRA-W can make a significant difference without enormous help from other organizations/people.

Q: How have you managed the balance between work and outside life over the years? What is your advice to those start-ing their careers?

No magic – I have an incredibly sup-portive spouse.  He is my rock and cheerleader.  We will celebrate our 45th anniversary next year.  In the early years of college and graduate school when we were both taking
classes, we had a lot of help from our parents both financially and as child-care givers. When I was a junior faculty and working long hours, his career took a back seat to mine. And, somehow, our son seems to have survived his childhood with a mom who was too often on the road. So I guess my best advice is to have a partner who understands and supports what you want to accomplish in life.

Q: Do you have any other advice for women at any stage of their careers?

Enjoy what you do.  Focus on the positive.  When people ask “how is it going,” answer in the positive (even though you may be totally stressed out at that particular moment in time). If you accept a task, do it to the absolute best of your ability.  If you don’t think that you can do that due to lack of time, motivation, skill set, or background, then bow out gracefully.  You can only afford to make one (or two) mis-takes of taking on something important and doing less than a quality job. Be prepared.  Be organized (I excel at this). Practice good time management. Take some time out for yourself.  Go to the gym, go line dancing, go to a movie or concert, go out to dinner with friends.