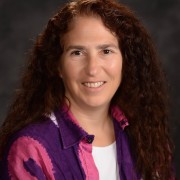 Nancy M. Amato is Unocal Professor in the Department of Computer Science and Engineering at Texas A&M where she co-directs the Parasol Lab.   She received undergraduate degrees in Mathematical Sciences and Economics   from Stanford University, and M.S. and Ph.D. degrees in Computer Science   from UC Berkeley and the University of Illinois at Urbana-Champaign. Her main areas of research focus are motion planning and robotics,   computational biology and geometry, and parallel and distributed computing.   She is Program Chair for IEEE ICRA 2015 and RSS 2016, was Editor-in-Chief   of the IEEE/RSJ IROS CPRB (2011-2013), and served on the editorial boards   of the IEEE TPDS and IEEE TRO. She is an elected member of the CRA Board   of Directors (2014-2017), and of the IEEE Robotics and Automation Society     AdCom (2009-2014). She is co-Chair of the CRA’s Committee on the Status   of Women in Computing Research (CRA-W) and was co-Chair of the NCWIT Academic     Alliance (2009-2011). She was an AT&T Bell Laboratories PhD Scholar,     received an NSF CAREER Award, is an ACM Distinguished Speaker, and was a   Distinguished Lecturer for the IEEE Robotics and Automation Society.   She   received the 2014 CRA A. Nico Haberman Award, the inaugural 2014 NCWIT   Harrold and Notkin Research and Graduate Mentoring Award, the 2013 IEEE   Hewlett-Packard/Harriet B. Rigas Award, and a University-level teaching award.   She is a AAAS Fellow, an ACM Fellow, and an IEEE Fellow.