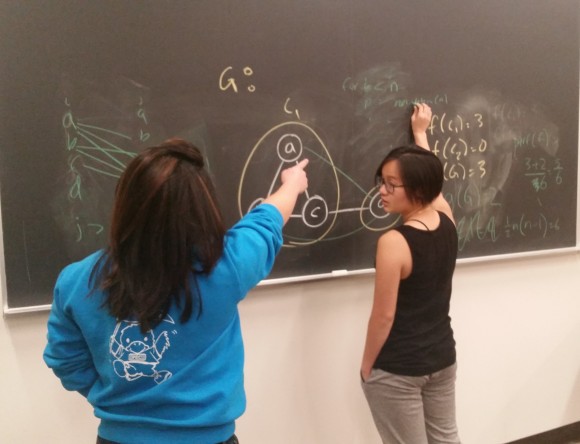 Several years ago, after devoting many years to the study of the gender gap in STEM fields using nationwide data on first-year college students, it became clear to me that the study of STEM in the “aggregate” was no longer a realistic or useful way to examine women’s progress in these fields. Not only does women’s representation in undergraduate STEM vary dramatically by field (constituting as many as 58% of bachelor’s degree earners in the biological sciences and only 18% of degree earners in computer science and engineering [NCES, 2015]), but STEM fields are distinct from each other in many other ways, including curriculum, career paths, and the types of students they attract.

With support from the National Science Foundation (HRD #1135727), my colleagues and I embarked on a study to understand how the gender gap varies by STEM subfield, how that has changed over the last several decades, and how the nature of individual student characteristics has shaped the observed trends. We examined these key questions separately for the biological sciences, computer science, engineering, math/statistics, and the physical sciences, producing several discipline-specific publications in the process. 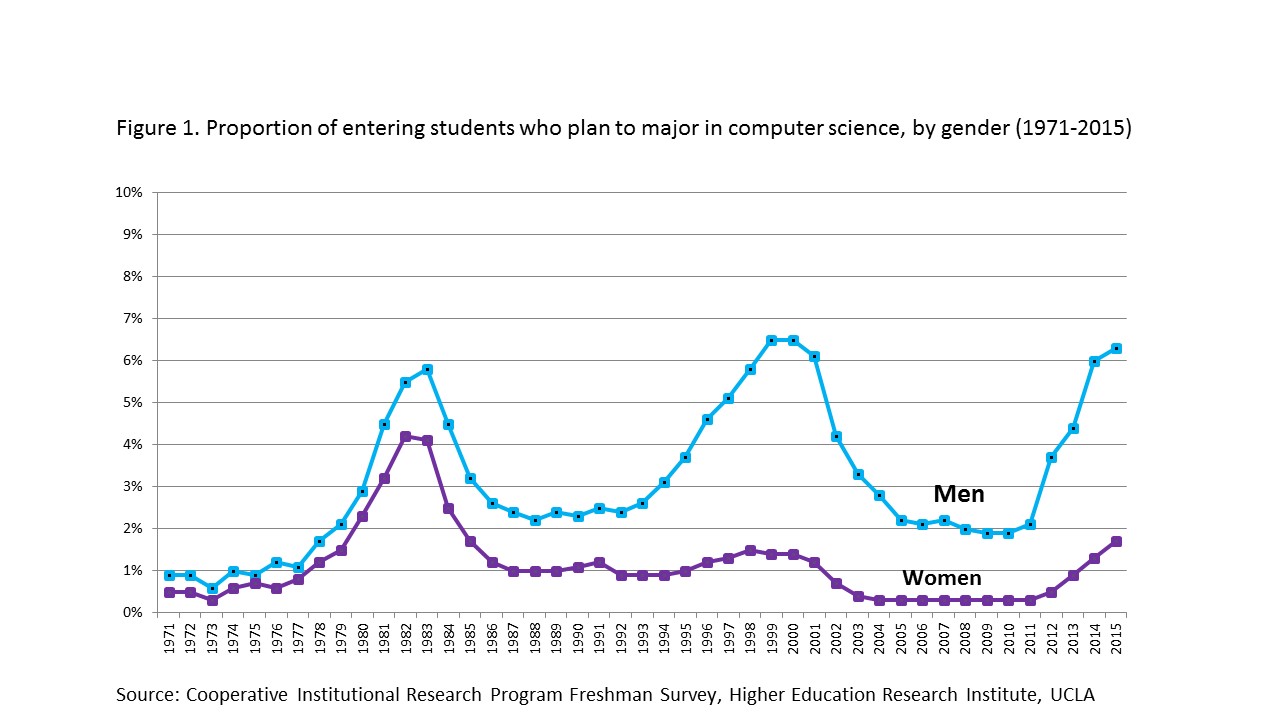 Of all the fields that we examined, we were most captivated by computer science. While other STEM fields reveal a gender gap that has evolved in a fairly consistent manner over time (either shrinking, growing, or remaining stable), the gender gap in CS has fluctuated wildly over the years (Figure 1). The unique ebb and flow of men’s and women’s interest in computing reflects, on the one hand, an issue of supply and demand (i.e., fluctuations in job opportunities in computing and the growing or shrinking of computer science departments), but on the other hand reflects broader societal shifts (i.e., opportunities available to women and the changing perceptions of what it means to be a computer scientist).

A New Approach to Understanding Students’ Interest in Computer Science
Beyond simply tracking the proportion of women and men who plan to major in CS in college—something that has already received significant attention in research and policy circles—we focused on the gender gap in computing in a more nuanced way. That is, we sought to understand the differences in the characteristics of men and women planning to major in CS and whether these characteristics had changed in any significant way in recent decades. The complete study was recently published in The Journal of Higher Education (Sax, et al., 2016), with selected findings reported here.

The study relied on nationwide survey data collected over the past several decades from first-year college students entering four-year colleges and universities. These students completed the well-known Cooperative Institutional Research Program “Freshman Survey” administered by the Higher Education Research Institute at UCLA. The survey asks students a wide range of questions, including their demographic background, high school experiences, college expectations, value, life goals, and self-concepts. The survey also asks students to indicate their intended undergraduate major, and our research focused on distinguishing those intending to major in computer science from those seeking degrees in another field.

Because we were interested in how the characteristics of men and women seeking CS degrees may have changed over time, we selected the following five time points as the focus of our analysis: 1976, 1986, 1996, 2006, and 2011. These particular years were chosen because they provided the most consistent set of survey items at evenly spaced decade intervals, including an additional half decade to include data through 2011.[1] Ultimately, our multivariate dataset across these selected years included 18,830 intended computer science majors (14,703 men and 4,127 women) and 904,307 students (408,910 men and 495,397 women) intending to major in other fields at more than 1,000 four-year colleges and universities.

To address our research questions, we used logistic regression analysis to identify the significant predictors of majoring in computer science (versus any other field) for men and women across all years, along with interaction terms (variable x time) to assess whether the predictive power of any independent variables had become more or less salient over the years.

Why Some Students Major in CS 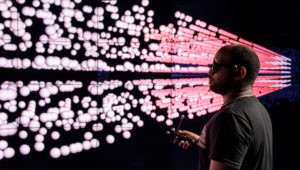 Of the variables that emerged as significant predictors of majoring in computer science, about a quarter are similar for men and women and have remained steady predictors over the years. For example, men and women whose father has or had a career in STEM are more likely to pursue computer science as a major, and the predictive power of this variable has remained consistent over time. Similarly, across recent decades, men and women who intend to be a computer science major are more likely to be Asian/Pacific Islander or Black/African American (and less likely to be White/Caucasian) than are students pursuing other majors. CS majors are also more likely than non-CS majors to be Latina/o. This fact has held steady over time for women, but has become less true over time for men (i.e., the positive predictive power of being Latino on the decision to major in CS has become weaker over the years).

Our results also show that students of either gender who place a greater value on working toward social activist goals (e.g., helping others in difficulty, participating in community actions or influencing social values) tend not to pursue a major in computer science, and these effects are consistent over the years. In other words, despite growing efforts to emphasize the broader impacts of computing, students seeking to “change the world” are continuing to seek other fields of study in college. 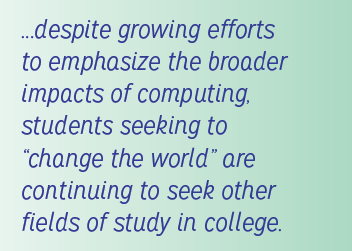 Some predictors of majoring in computer science have changed in their predictive power over the years. For example, the survey has long shown that men and women who place a greater personal importance on “raising a family” tend to have majors other than computer science, and this negative relationship has become significantly stronger over the years. In other words, undergraduate computing departments are even less likely than they were in the past to recruit students who see raising a family as an important life priority.

Another example of a variable becoming more salient over time relates to one’s scientific orientation. Students of either gender who express a stronger commitment to making a “theoretical contribution to science” are more likely to pursue a computer science major, but over time this variable has become a significantly stronger predictor for women while remaining a steady predictor for men. In other words, it is increasingly the case that computer science attracts women who see themselves as committed to scientific inquiry. While at face value that seems like positive news for the field of computer science, the fact is that women are much less likely than men to report having a strong scientific orientation upon entering college; thus, many potential female computing majors may be deterred from the field if they simply don’t “see” themselves as the scientific type.

Still, there is some positive news when it comes to attracting women to computing. The first relates to the role of mathematical self-concept. Specifically, even though women rate their math abilities lower than men do—and perceptions of one’s math ability is one of the strongest predictors of a major in computer science—the fact is that the importance of mathematical self-concept in determining who will pursue computer science has weakened over time. Thus, despite the fact that women tend to have lower math confidence than men do, this differential has become less consequential over time in determining who will major in computer science.

Perhaps the most encouraging finding from the study relates to changes in the likelihood of artistically oriented women to pursue computer science in college. To be sure, relative to other fields, computing tends to not attract students who are interested in creating artistic work or have high confidence in their artistic abilities. However, over time an artistic orientation has become a less salient deterrent to women’s decision to major in computer science. Put another way, women with more creative and artistic orientations are increasingly less likely to avoid majoring in computer science. Time will tell whether this trend will continue as the computing field evolves and becomes increasingly connected to creative work in the arts and humanities. 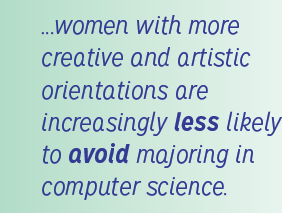 Implications for the Future of Computer Science

Our research on the evolution of students’ interest in computer science shows us that the nature of who pursues computing is neither consistent across student subgroups nor static over time. While some student attributes do consistently correlate with the selection of a computer science major, most do not. As student populations evolve over time, and as the field of computing itself changes over the years, certain predictors become more or less prominent in predicting whether college students will express an interest in majoring in the field. Further, such shifts do not always occur in the same way for men and women. These findings are perhaps especially critical today given the current surging interest in undergraduate computing. Knowing, for example, that CS tends not to attract activist-minded students or those who prioritize raising a family raises the 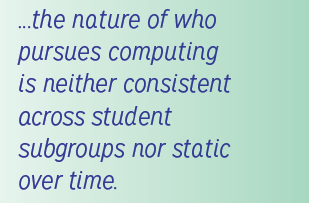 question of how the field should rebrand itself so that students can better understand how innovation and flexibility in computing careers can actually enable them to contribute to positive social change and/or balance the demands of work and family. Similarly, awareness that the field is now doing a better job of attracting women from a range of perceived math abilities and artistic orientations suggests that there is growing opportunity for faculty and administrators to appeal to a wider swath of women than in the past. There is no doubt that computing departments that aspire to both grow and diversify would benefit from more information on the changing backgrounds and interests of the different populations enrolling in their programs.

Linda J. Sax is a professor of higher education in the Graduate School of Education & Information Studies at UCLA. Her research focuses on gender differences in college student development, with an emphasis on women in STEM fields. She is the principal investigator for the research component of the BRAID initiative aimed at diversifying the computer science major. Her research has been funded by the National Science Foundation, the U.S. Department of Education, the Alfred P. Sloan Foundation, the Computing Research Association, and the Anita Borg Institute, among others. She is the author of more than 100 publications, including the book The Gender Gap in College: Maximizing the Developmental Potential of Women and Men.

[1] The analyses for this study were completed prior to the recent surge of interest in computer science; selected findings up through 2015 are discussed in Lehman, Sax, and Zimmerman (2016). 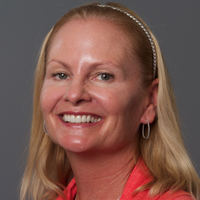 Undergraduate Research Opportunity Listing Service
Scroll to top
We use cookies to understand how you use our site and to improve your experience. By continuing to use our site, you accept our use of cookies.Accept Read More
Disclaimer
Privacy Overview