CRA’s A. Nico Habermann Award is usually presented annually to a person who has made outstanding contributions aimed at increasing the numbers and/or successes of underrepresented members in the computing research community. It honors the late A. Nico Habermann, who headed NSF’s Computer and Information Science and Engineering Directorate and who was deeply committed to increasing the participation of women and underrepresented minorities in computing research. 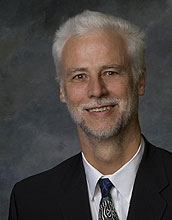 The CRA board has selected Richard E. Ladner, Boeing Professor in Computer Science and Engineering at the University of Washington, to receive the 2008 Habermann Award. Professor Ladner is recognized for his lifelong, strong and persistent advocacy on behalf of people with disabilities in the computing community.
Ladner’s contributions have taken three forms: mentoring of students, research both with and for persons with disabilities, and national advocacy. He is known for his dedicated, one-on-one mentoring of students (both with and without disabilities). Over the past 15 summers, he has worked with 38 severely disabled high school students on week-long summer projects in computing. Ladner has also mentored undergraduates and graduate students with disabilities, often working with them on assistive technology research. His assistive technology efforts have resulted in networking (remote login, email) for Seattle’s deaf-blind community, large-print user interfaces for Unix machines, video compression algorithms that are tailored to American Sign Language and simple enough to implement in real-time on a cell phone, and new image processing and enhancement algorithms to convert graphical images–diagrams in math and science textbooks–into tactile images.
Richard Ladner currently co-leads the NSF-sponsored AccessComputing Alliance, a national effort to increase the number of students with disabilities majoring in computing. As part of their effort, the Alliance hosts workshops and summer camps around the country, and Ladner has run many of these, including a three-day Vertical Mentoring Workshop for the Blind in Science, Technology, Engineering and Mathematics, and a nine-week summer camp for deaf students. Ladner has also been tireless in his advocacy at the national level: he has spoken to many groups, including department chairs at the CRA Conference at Snowbird, and worked with organizations and departments (through AccessComputing’s communities of practice) to make it easier for students with disabilities to fully participate.