[Editor’s Note: Each year, the Coalition for National Science Funding (of which CRA is a member) hosts a Capitol Hill science exposition featuring representatives from 30+ universities and scientific societies, all there to highlight the important research funded by the National Science Foundation for an audience of Members of Congress, congressional staffers, Administration and agency staffers, members of the scientific advocacy community and the press. This year’s exhibition happened to coincide with National Robotics Week, so we at CRA were fortunate that well-known roboticist Dr. Robin Murphy, of Texas A&M University, could pull double-duty and appear at both the Congressional Robotics Caucus briefing marking National Robotics Week and represent CRA at the CNSF exhibition. We were also pleased that Dr. Murphy brought along one of her graduate students, Brittany Duncan, to help show off their research. Brittany put together a great account of her experience at the exhibition that, with her permission, we’re happy to reprint here.]

I wanted to add the graduate student view of CRA from my participation in the CNSF Exhibition during the National Robot Awareness week. I’m a grad student at Texas A&M University, where I have an OGS Diversity Fellowship and an NSF Graduate Research Fellowship. Before this event, I wasn’t familiar with the CRA beyond the Distributed Mentoring Program which I was funded under in 2008.

One of the big lessons I learned was that I didn’t realize how much muscle it takes to be a roboticist! I helped haul 120 pounds of robots about ½ a block from the curb to the disabled access entrance, unpacked and repacked the robots to get them through security, and then navigated the Rayburn Building. 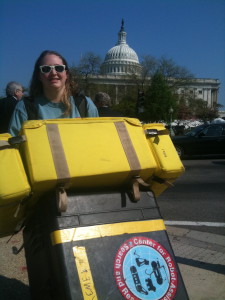 The event was really something special, having a room full of scientists interacting with each other, and with everyone enthusiastic about outreach. As roboticists, we get used to this but it is truly great to see how people react to our robots, not just members of Congress but also the other scientists and even kids. It was great to meet congressmen and women who were interested in science and technology AND how to get students more involved in these areas. I also liked the fact that the other scientists were interested in us and how to work with our lab in the future. The highlight of my night was the one middle school student that was there got enthusiastic about robots, when he wasn’t before. His mom pushed him forward from the crowd to ask questions and get his picture taken with one of our robots.

There were many surprises on this visit. The first was that CRA does this (and that they thought robotics was cool enough to invite us to this event). I also thought it was great that the members of Congress were interested in science and in meeting me, as a grad student, versus just talking to me while they were waiting for Dr. Murphy. It was also surprising that I had things in common with Dahlia Sokolov, who is a Staff Director as well as a former NSF Graduate Research Fellow. I also had fun bonding with Rep. Vern Ehlers over flying because he is a pilot and I am working on my license.

As I stood there, I realized that this wonderful experience (as well as my NSF Graduate Fellowship and my choice of universities and advisors) stemmed in a large part from the summer I was funded by the CRA Distributed Mentoring Program (DMP). The DMP allowed me to see what it was like to research at a different school, which gave me a better appreciation for different points of view. It was also a big change to have a female mentor plus female grad students in the lab. The biggest change though was getting to see how it would be to spend time on research rather than juggling classes. Most importantly, I gained a group of people to get advice from about grad school, what to look for in grad school, and recommendations. In fact, I still remain in contact with some of these people, who are now Ph.D.s working in the field. To summarize, I would not be at Texas A&M without this experience and it gave me a head start for the NSF Graduate Research Fellowship. 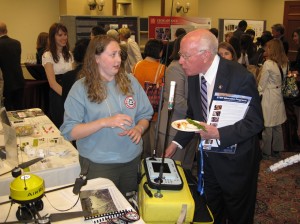 Duncan shares some of her research with Rep. Vern Ehlers (R-MI), ranking member of the House Science and Tech Committee Subcommittee on Research and Education

The experience of getting to go to Washington to demo for Congress was a big deal because it allowed me to talk and demo our robots to the people who make decisions about the future of robotics and computer science. I also gained a great deal of pride in CRA and the great job that both Peter and Melissa do!  They were wonderful hosts and really helped us to meet people.

[Ed note: If your institution is a CRA member and you’d like to participate in next year’s CNSF Exhibition as CRA’s representative, let us know!]