CRA members have elected three new members to its Board of Directors: Alex Aiken, Cindy Bethel and Fatma Özcan. Nancy Amato, Carla Brodley, Dan Grossman and Kim Hazelwood were re-elected to the CRA board. Mary Hall and Mark Hill, who held non-elected positions on the board, have also been elected. All of their terms run from July 1, 2020 through June 30, 2023. CRA would like to thank everyone who agreed to run this year.

There have also been changes to the appointed members to the board. Kathleen Fisher has been appointed the new ACM representative, replacing Mary Hall and joining Alexander Wolf. Beginning July 1, Liz Bradley will replace Mark Hill as the CCC Chair and representative on the board.

Kathleen Fisher
Professor Kathleen Fisher is chair of the Computer Science Department at Tufts University. Previously, she was a program manager at DARPA and a principal member of the technical staff at AT&T Labs Research. She received her Ph.D. in computer science from Stanford University.  Fisher is a Fellow of the Association of Computing Machinery (ACM) and a Hertz Foundation Fellow. Service to the community has been a hallmark of her career.  She served as chair of the ACM Special Interest Group in Programming Languages (SIGPLAN) and as program chair for three of SIGPLAN’s marquee conferences: Programming Language Design and Implementation (PLDI), Object-Oriented Programming Languages, Systems, and Applications (OOPSLA), and the International Conference on Functional Programming (ICFP). She has also served as associate editor of ACM’s Transactions on Programming Languages and Systems (TOPLAS) and as an editor of the Journal of Functional Programming. Fisher has long been a leader in the effort to increase diversity and inclusion in Computer Science: she was co-chair of the Computing Research Association’s Committee on the Status of Women (CRA-W) for three years, and she co-founded SIGPLAN’s Programming Language Mentoring Workshop (PLMW) Series.  Kathleen is a recipient of the SIGPLAN Distinguished Service Award.  She is chair of DARPA’s ISAT Study Group and a member of the Board of Trustees of Harvey Mudd College. 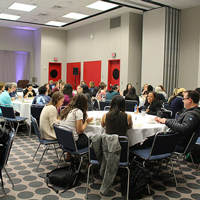