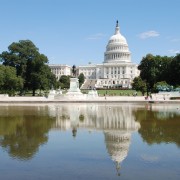 The Computing Research Association has been involved in shaping federal public policy of relevance to computing research for more than fifteen years, and weighs in on multiple issues that can affect the computing researching community. The Issues pages below provide links to information on research, science, and technology policy, with emphasis on issues of interest to computing research. While not comprehensive, below are a number of issues that the Association has worked on over the past few years. As new issues arise, which require CRA’s input, they will be added. To find out specifics on what CRA has done, please read through our Policy Blog.

Advances in information technology (IT) are changing our lives, driving our economy, and transforming the conduct of science. America is the world leader in IT innovation because of a complex interplay of universities, industry, and the federal government. Essentially every aspect of IT upon which we rely today – every billion-dollar sub-category of the IT industry – bears the clear stamp of federally supported university-based research. These relatively modest investments have played an essential role in the past, and will play an essential role in the future. CRA’s mission in Washington is to be the voice for the computer researching community and to make sure that Congress and Administration officials, regardless of party, are aware of the benefits of this publicly funded research.

Many of the technologies that have enabled our current economic prosperity and increased our national security have their roots in university research supported by DARPA. The Internet, graphical user interfaces, and global positioning systems are all the result of long-term, cutting edge, university based research, supported decades ago by DARPA. The CS community still receives a significant amount of funding from defense related sources and it is vital that the community continue to the how the money is spent and in which directions the research is being taken.

Having a highly skilled IT workforce is crucial to America’s economic future, to ensuring our national security, and to maintain our leadership in the world research and development community. In order to assess that workforce, it is crucial that we understand the number of science and engineering degrees granted to American students annually. The flagship publication of CRA is the annual Taulbee Survey, which tracks information on the enrollment, production, and employment of Ph.D.s in computer science and computer engineering and in providing salary and demographic data for CS and CE faculty in North America. CRA takes an active role in disseminating the information collected in the Taulbee Survey to policy makers and other decision makers in Washington. As well, CRA is an active voice for Computer Science education, working with other organizations, both inside and outside the Computer Science community, in order to better prepare Americans for life in a IT-integrated world.

Information technology systems underpin key industries such as telecommunications and financial services, and also play a vital role in the smooth functioning of critical infrastructure and services, such as transportation systems, the electric power grid, and emergency response capabilities. As computer scientists, CRA is concerned how the Federal government approaches the cybersecurity needs of the country and must always be vigilant that the issue is handled with thought and care. We are particularly concerned the research funds at the relevant Executive Branch agencies, such as the National Science Foundation (NSF), Department of Defense (DOD), Department of Homeland Security (DHS), are adequate to meet the ever-changing needs of this fast-moving field.

Computing technology is rapidly entering another disruptive phase; namely, the Internet of Things. In the same way that the Internet revolutionized access to ideas and information, advances in networked sensing and hardware has revolutionized the way computers can observe and interact with the physical world. Sensing and sensor information processing will have a profound impact. Coupling these systems with advances in machine learning brings dramatic new capabilities including the ability to capture and process tremendous amounts of data, predict behaviors, activities, and the future and manipulate the physical world in response. Physical interaction with “smart systems” will become a common way to manipulate the world around us. Applications of IoT include creating Smart Cities and Smart Homes, in which existing “dumb” infrastructure like roads and buildings becomes intelligent, greatly increasing efficiency and productivity. IoT will transform health care, providing improved, pervasive, and cost-effective health care to millions, including our increasing population of the elderly. This is an area the U.S. cannot afford to cede leadership, and our leadership in this area is not assured. Competition from Asia and the European Union is significant with advances in Smart Cities and Smart Homes outpacing the U.S. The Federal government must be proactive in driving the necessary research, standards, and public/private partnerships to ensure that the greatest benefit is reached with the least negative consequences. Efforts like the Smart Cities and Connected Communities framework developed by NITRD and the recently announced NSF/Intel partnership to secure the IoT should be supported and buttressed where possible.

Impediments to CS research are many. Visa issues and other immigration problems; deemed export restrictions; federal requirements on public access to research data (Open Data) and journal publications (Open Access); and legislation targeting key science funding agencies, such as the National Science Foundation, are all examples of dangers to research that have come about in Washington. While many of these are unintended, or are wrapped up in larger issues outside the CS community’s expertise, it is still important to monitor what is happening and try to bring attention to bear whenever possible.