D. The Mixed News on Diversity and the Enrollment Surge

A positive consequence of the current enrollment surge is a significant increase in the number of women and underrepresented minority (URM) students in computer science, both in courses and as majors. In addition, there is also some good news in regard to the percentage of women and URM students in aggregate; the good news, however, is not universal across all units[1] surveyed.

This section examines the impact of the enrollment surge on diversity, using both existing data sets (i.e., the CRA Taulbee Survey and IPEDS) and data collected from the CRA Enrollment Survey. We also highlight relationships discovered between actions to manage the surge and their impact on diversity.

The survey asked units for women and URM student enrollment data, and the data is examined later in this section. The survey also asked each unit’s perception about trends in the recruitment and retention of students from underrepresented groups. Approximately 50% of the units perceive the percentage of women in their unit is increasing. While this perception exists in both doctoral- and non-doctoral granting units, doctoral-granting units were more likely to state the percentage of females in their unit is increasing significantly. We understand that perception may not reflect reality but, in this case, hard data on the percentage of women enrolled in the introductory course for majors is consistent with the unit’s self-reported change in the ratio of women entering the major. Specifically, the proportion of women in the intro majors course at doctoral-granting units increased by an average of 0.4 percentage points from 2010 to 2015 for units that self-reported the proportion of women was level or declining (n=18), by 5.1 percentage points for units reporting the proportion of women as increasing (n=14), and by 7.3 percentage points for units reporting the proportion of women as significantly increasing (n=8). Furthermore, the enrollment data results discussed in this section show that the median percentage of female students in the courses surveyed has increased overall at both doctoral- and non-doctoral granting units. While some may consider the percentage increase to be significant, others would likely note that we are still a long way from gender parity.

While there is some good news here, the data does suggest a shrinking pipeline may exist for both female and URM students (i.e., in the course data provided, the representation of these students decreased from the intro through mid-level through upper-level courses). Also, as mentioned previously, not all units are seeing an increase in the percentage of women and URM students participating in computer science. In short, much work remains to meet our community’s goals for diversity.

Diversity Statistics From the Taulbee and IPEDS Data

For URMs, we consider Blacks/African Americans, Hispanics/Latinos, and other underrepresented groups (American Indians or Alaska Natives plus, after 2007, Native Hawaiians or Other Pacific Islanders). The omission of the Asian and Multiracial (“Two or more Races”) categories is designed to avoid considering groups that are not underrepresented in computing. We first examine the Taulbee Survey data for doctoral-granting units. In 2006, URM students comprised 9% of the CS graduating students at doctoral-granting units. We saw the percentage of URM students earning bachelor’s degrees in CS increase to 12% in 2008, which coincided with the shift to new categories for race and ethnicity, a decrease to 9% in 2010 (the low point), and a subsequent gradual increase to 11% in 2015. IPEDS statistics for doctoral-granting units are a bit different from the Taulbee data, likely because of the difference in the definition of doctoral-granting[2], but the general trend shows 11-12% of computer science bachelor’s degrees were awarded to URMs from 2006-2011; in 2015, URM students comprised 13% of the computer science bachelor’s degree graduates at doctoral-granting units. In non-doctoral granting units, IPEDS data shows a higher percentage of URM students, with almost 20% in 2006, but remaining close to 18% for most of the 2007-2105 period. A decline in Black/African American completions was offset by an increase in Hispanic/Latino completions.

The Impact of the Enrollment Surge on the Representation of Women 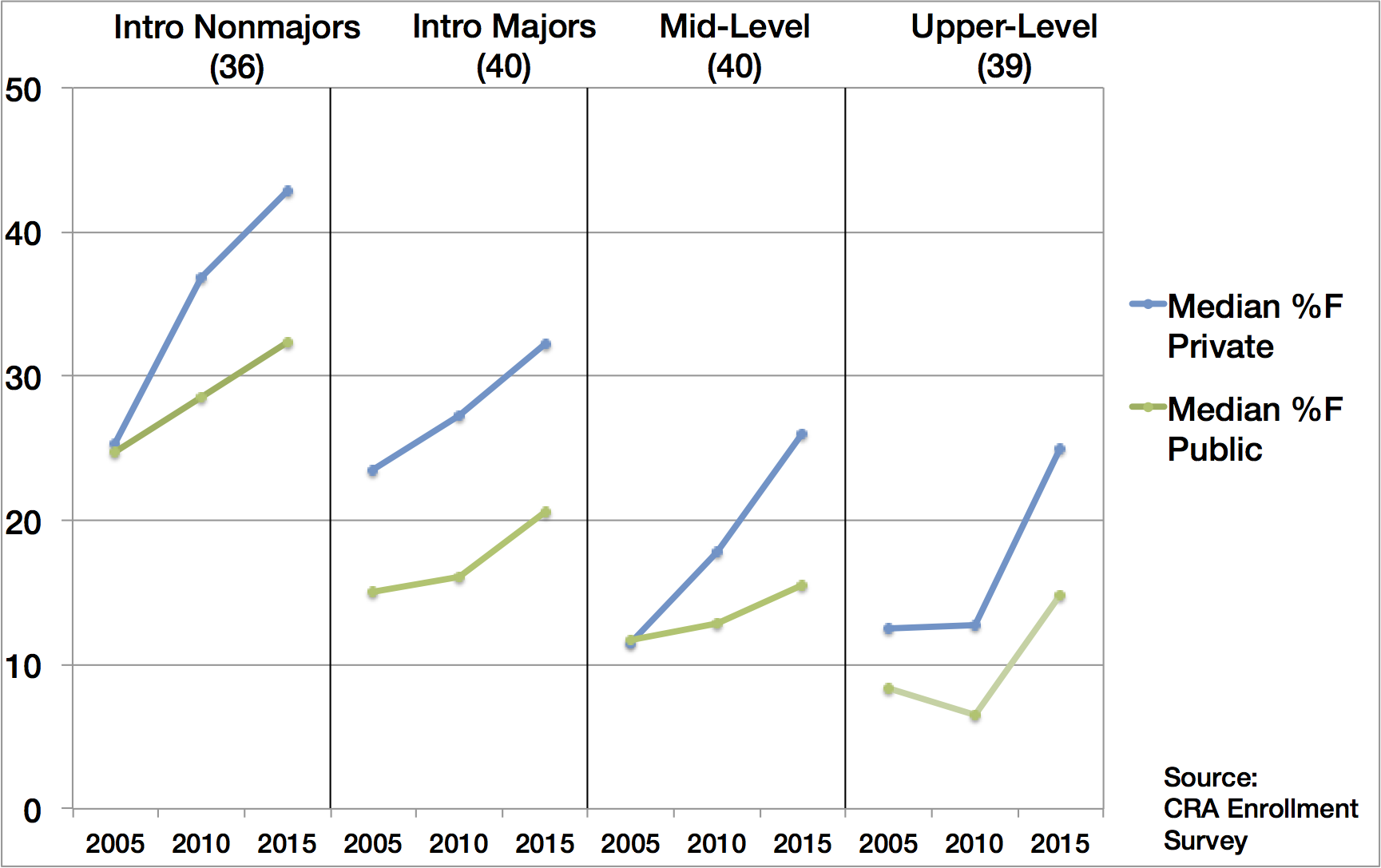 Figure D.2: Median percentage of female students in the courses surveyed in doctoral-granting units: public vs. private. Number in parentheses in each category indicates sample size.

While Figures D.1 and D.2 show the change in the median percentage of women across units, Figure D.3 shows how much women’s representation in the chosen upper-level course varies by unit. Across units, the percentage of women enrolled in the upper-level course ranged from a low of 0-2% (5 units in 2010, but none in 2015) to a high of 42-44% (one unit in 2015). In short, there is substantial variation across departments, but the distribution, as a whole, shifted up between 2010 and 2015. 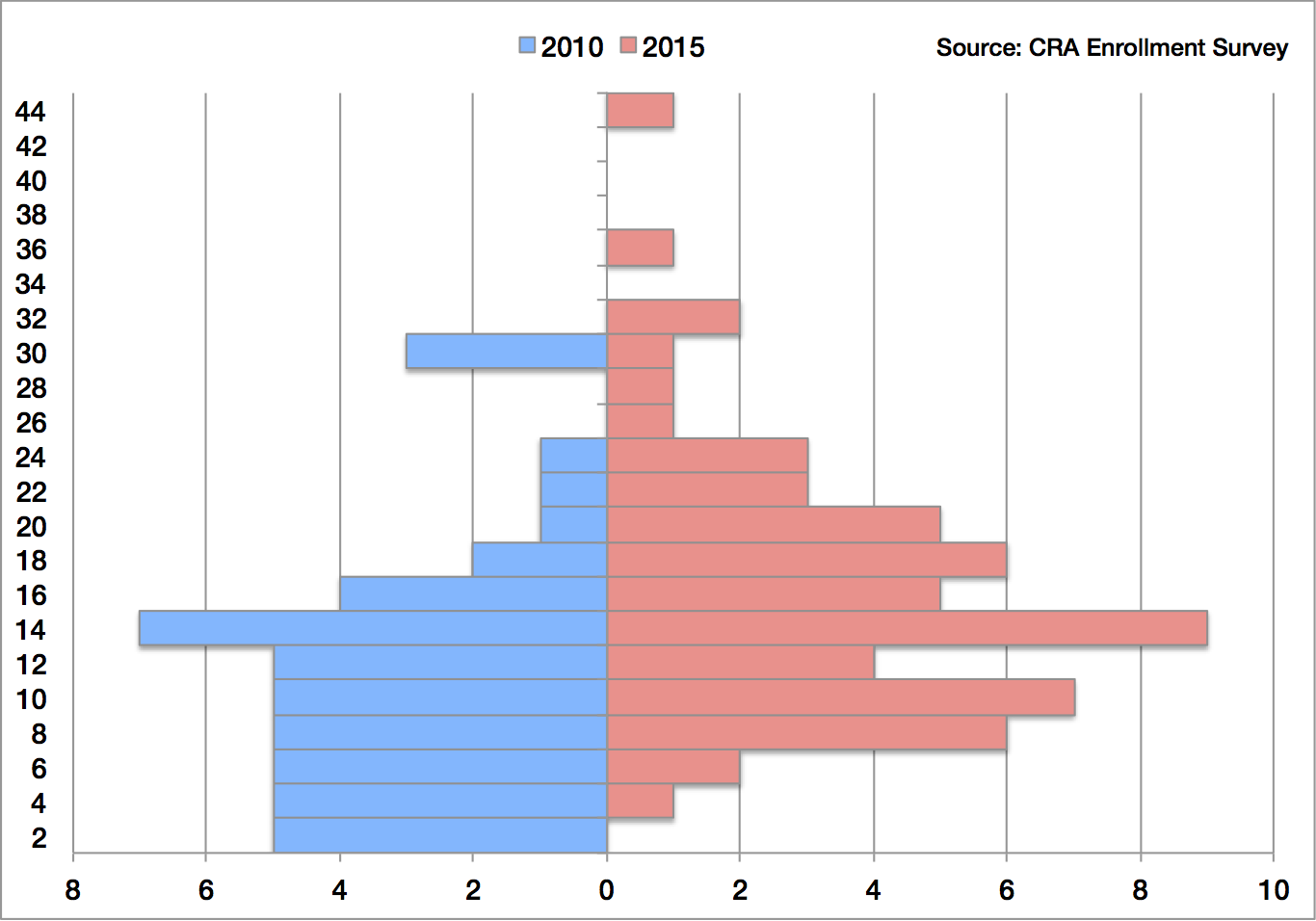 Figure D.3: Number of doctoral-granting units with indicated percentage of women in representative upper-level courses in 2010 and 2015.

The number of URM students has also shown remarkable growth since 2005, mostly between 2010 and 2015. As shown in Figure D.4, the total number of minority students reported in the course enrollment data of doctoral-granting units has grown from 708 to 808 to 1620 in the intro required course (33 units), from 299 to 443 to 992 in the mid-level course (33 units), and from 208 to 322 to 606 in the upper-level course (32 units). While this growth in the number of URM students is occurring at all units, we note that a significant number of URM students are added by the four minority-serving institutions (MSIs) in our sample. Because these MSIs have a very different profile of students, they could bias our data and are thus removed from the following analysis of percentages and correlations. 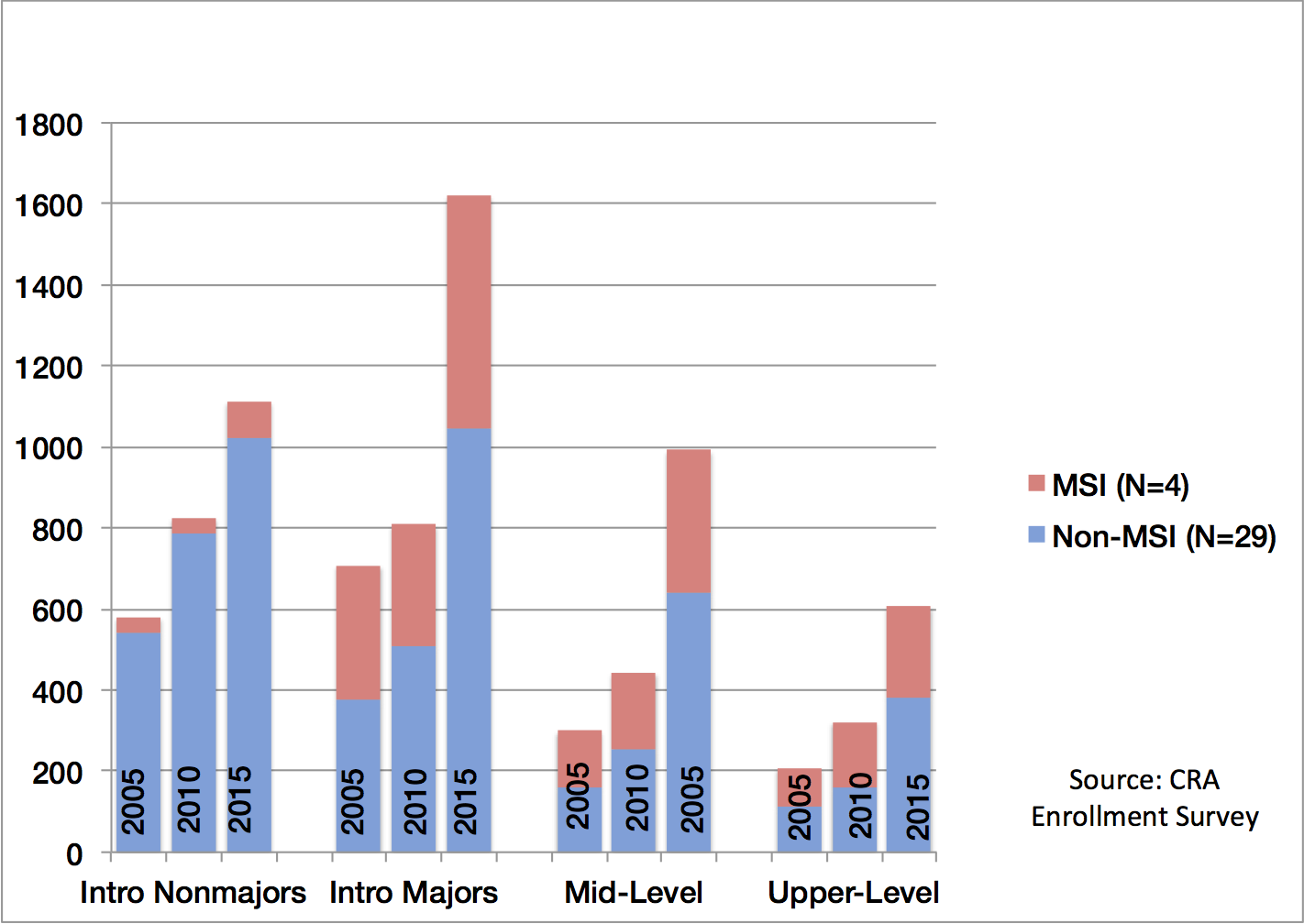 Although the percentage of URM students appears to be growing, we note that the percentages are still extremely small (e.g., only 9% URM students in the 2015 upper-level course data for doctoral-granting units). In fact, in 2005, the median percentage of URM students reported by non-doctoral granting units for the upper-level course was 0. Clearly, there is much room for growth among the URM student population, especially when one considers that 34% of college students are URM in the United States[3]. Similar to the trends we see in the course enrollment data for women, we typically see a decrease in the URM student representation from the intro through mid-level through upper-level courses. As previously mentioned, further study is needed to determine whether a leaky pipeline exists.

Figure D.5: Median percentage of URM students in the courses surveyed (excluding MSIs).
No percentage increase is shown for non-doctoral upper-level courses because the 2005 median was zero.

The Relationships Between Unit Actions and Diversity Growth

The CRA Enrollment Survey included several questions about the actions that units were taking in response to the surge. In this section, we highlight a few statistically significant correlations that relate growth in female and URM students to unit responses (actually, a composite[4] of several different responses).

Because of computer science’s past history, there is concern that the actions departments take to manage increased enrollments might have a side effect of reducing diversity. At this point, we see substantial increases in the number of women and underrepresented minorities enrolling in computer science courses, and median percentages of both groups at all course levels has also grown. This result holds for all courses for which there is sufficient data from our survey, and in both doctoral-granting and non-doctoral granting units. In other words, growth in female and URM students appears to be greater than the overall growth in students. Yet, we must continue our efforts to attract and retain these populations, as the percentages are still nowhere near where they should be. Our course data for both female and URM students shows decreases in each year as the course level increases. Further study is needed to determine whether a leaky pipeline exists, or whether there is another explanation for this trend.

This period of unprecedented growth in the field may actually be an opportunity to increase the diversity of computer science undergraduates. The CRA data shows that very few units are specifically choosing or rejecting actions due to diversity, but those that do have a higher percentage of female and URM students. It is likely that many of these units have been considering diversity in their actions over the long term, not just with respect to the enrollment surge. We strongly encourage units to track the diversity of their majors, minors, and nonmajors and to consider the effect of the actions that they take on the diversity of their programs. We need to ensure that the diversity gains we have recently seen can bring the computing community closer to representing the population that uses the technology we create.

[2] Taulbee and NDC survey data define doctoral- and non-doctoral granting units by whether the unit grants doctorates specifically in computing. IPEDS doctoral-granting units are institutions who grant at least 20 research/scholarship doctorates in any field (not including professional practice doctoral-level degrees such as JD and MD), following the Carnegie Classification of Institutions of Higher Education.

[4] Composites that were used for correlations include “Any Diversity Action Taken” and “Diversity Considered in Decisions”. Specifics of how these composites were determined are given in [H: Methodology].