Enrollments in undergraduate computer science programs rose 9.6 percent in the 2011-12 school year, the fourth straight year of increase, according to new data released today by the Computing Research Association. 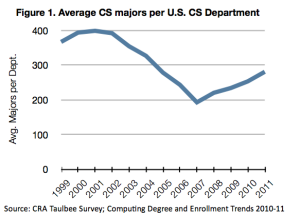 The data, found in the CRA Taulbee Survey report Computing Degree and Enrollment Trends, 2010-2011, compares schools that responded to both this year’s survey and last. Overall enrollment — including schools that did not participate in the survey last year — increased by 11.5 percent per department compared to the 2010-11 school year. The report also suggests that student interest in computer science may even be higher than the enrollment statistics indicate, noting that enrollments at some schools are constrained by enrollment caps in computer science departments. Free of these caps, in place because of faculty or infrastructure limitations, the report suggests that enrollments might have reflected even larger increases.

The number of bachelors degrees in computer science awarded by U.S. schools also increased by 10.5 percent in the 2010-11 school year, according to the report. Among schools who responded to both year’s surveys, the increase was 12.9 percent. 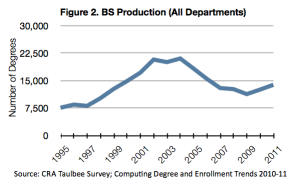 The CRA Taulbee Survey is conducted annually by the Computing Research Association to document trends in student enrollment, degree production, employment of graduates, and faculty salaries in academic units in the United States and Canada that grant the Ph.D. in computer science (CS), computer engineering (CE) or information (I). CRA today released its Computing Degrees and Enrollment Trends, 2010-2011 report. The full Taulbee dataset will be released to the public in May and published in CRA’s Computing Research News.