B. The Phenomenal Growth of CS Majors Since 2006

Academic units are taking a range of actions to handle the increased enrollment and the demand on resources. Without question, the demands are putting an enormous stress on academic units and their faculty. Institutions will need to respond with actions that recognize the reasons for the increased student interest from both majors and nonmajors, and the role that computing plays in a wide range of disciplines and jobs.

This section provides details on the magnitude of the growth of CS majors since 2006. We provide data on the growth of the number of majors as well as the cumulative growth of majors, compare the cumulative growth of majors with the growth in tenure-track and teaching faculty, and illustrate the enrollment increase for courses at three different levels of the curriculum. Most of this section focuses on doctoral-granting units, for which more abundant data is available. Data on non-doctoral granting units is included when available.

Enrollment Growth in Numbers and Percentages

Figure B.1: Average number of CS majors per unit since 2006.

The current growth period began a decade ago. Figure B.1 shows how the average undergraduate enrollment has increased each year during this period[2]. While this growth is impressive, it is natural to ask just how pervasive enrollment increases have been. To better illustrate this, we first show enrollments when partitioning academic units by tenure-track faculty size (as done by the CRA Taulbee Survey). Figure B.2 shows the average number of CS majors in “small” and “large” units, where “large” is defined as units having at least 25 tenure-track faculty. In 2015-16, 70 large and 75 small units completed the survey. Both groups experienced significant enrollment increases, with large units having roughly twice as many majors as small units. In percentages, however, the increases are very similar. We also examined the growth at public versus private institutions and found the increase in enrollment similar at both types of institutions. 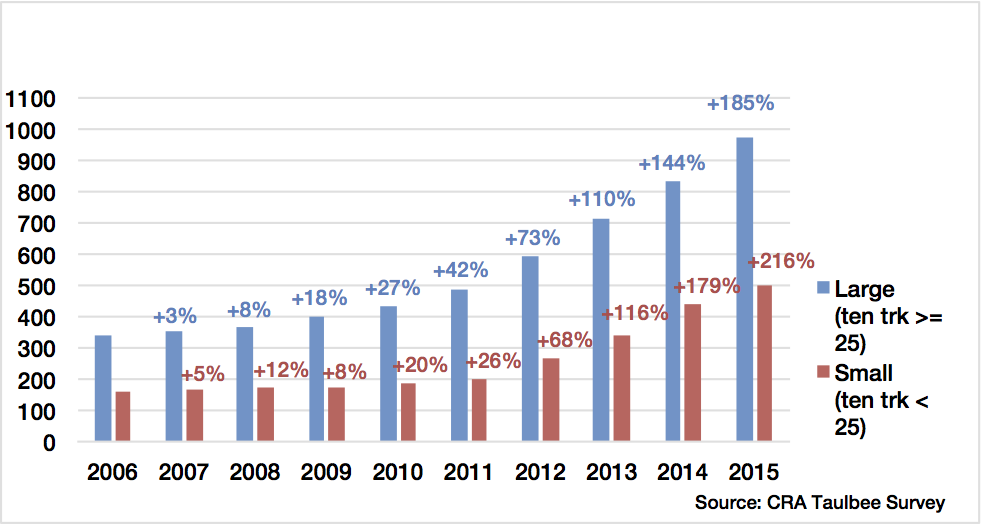 Figure B.2: Average enrollment by CS majors at large and small academic units (based on number of tenure track faculty). The percentages denote cumulative changes since 2006.

Reporting means on enrollments could allow a few units to excessively skew the overall growth patterns. Figure B.3 shows the cumulative percentage of units experiencing different levels of increase from 2009-2014. Only 18% of the units experienced growth under 50% and only 37% experienced growth under 100%. To express this differently, over 60% of the units more than doubled their enrollment since 2009. 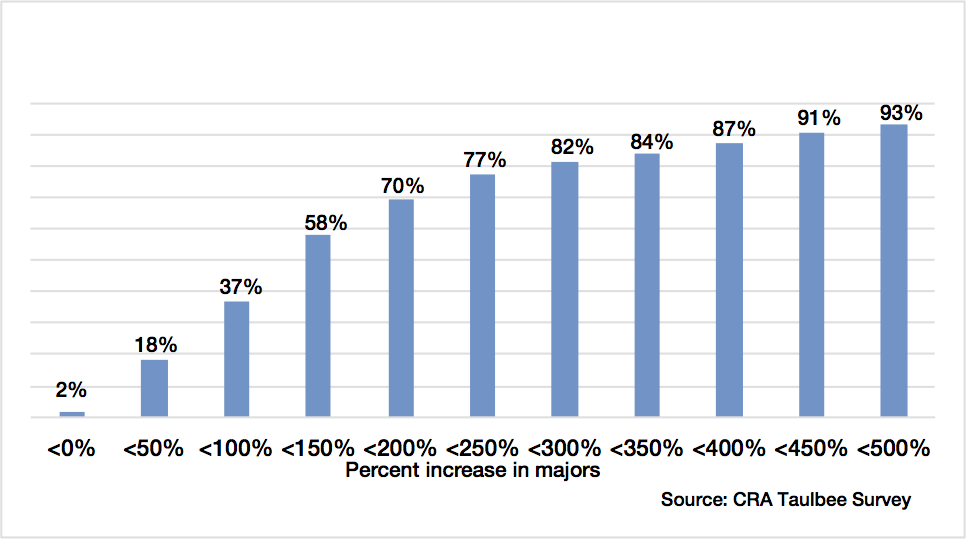 Figure B.3: Cumulative percent of units with the indicated level of growth in CS majors from 2009 to 2014.

Figure B.4: Cumulative percent growth of CS majors and instructional faculty since 2006.

The impact of the teaching demands is reflected in the responses units provided in the CRA Enrollment Survey. Actions that units have taken or plan to take are described in [F. Units’ Response].

Enrollment in CS Courses Across the Curriculum

Figure B.5 illustrates growth of CS majors in representative courses at the introductory, mid-level, and upper-level, at five-year intervals beginning with 2005. (See [A. CRA Committee] and [H. Methodology] for details on the course data collected.) The number of units from which such data was obtained is given in parenthesis next to the course name on the horizontal axis. 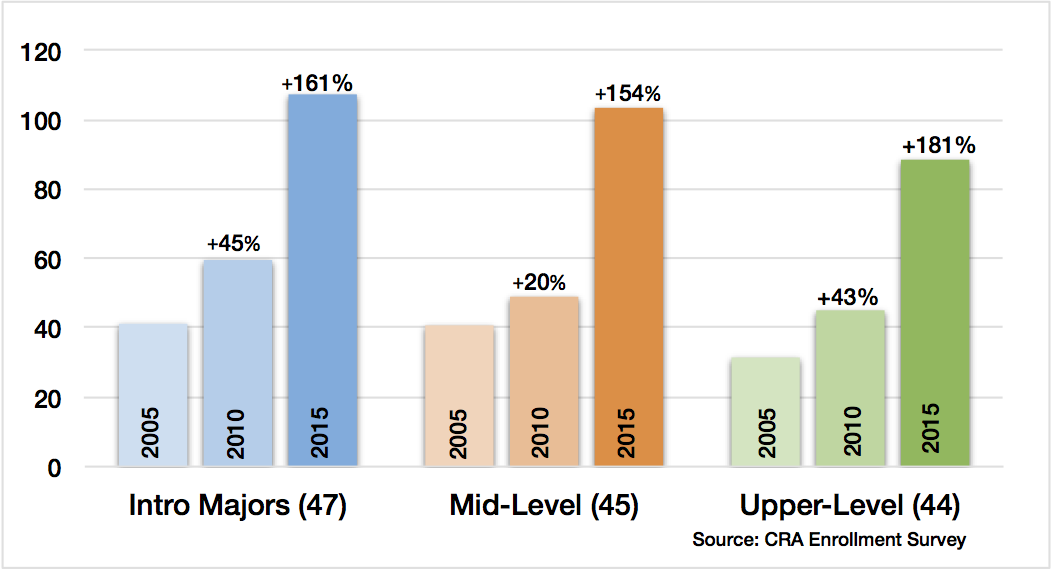 Figure B.5: Average enrollment by CS majors in three representative computing courses at doctoral-granting units from 2005 to 2015. The number in parentheses in each category indicates sample size 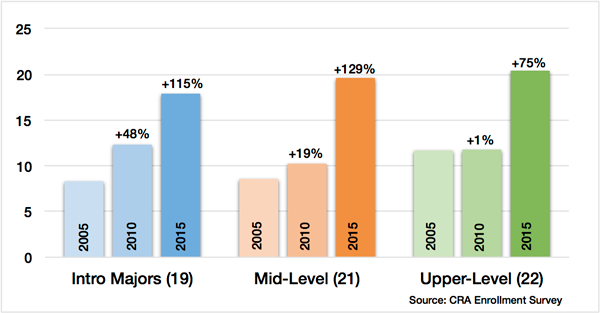 Figure B.6: Average enrollment by CS majors in computing courses at non-doctoral granting units from 2005 to 2015. The number in parentheses in each category indicates sample size.

The current surge of CS majors is pervasive. Large and small academic units in public and private institutions have been affected similarly. Doctoral-granting and non-doctoral granting units are affected, though doctoral-granting units to date have experienced larger increases. While academic units are taking a range of actions to handle the increased enrollment, percentage increases in tenure-track faculty are about 1/10-th of the increase in the number of majors. As illustrated in other sections, this discrepancy in students versus faculty has impacted the operation of programs. Many units face increased faculty retention problems, are not able to hire teaching faculty into newly created teaching positions, and realize that there are not enough new Ph.D.s to fill open faculty slots in the targeted areas.

The fundamental role that computing plays in society and in preparing students of all majors for a career in a competitive workforce suggests that course demand will remain high. Units need to work within their institution to develop a sustainable model that meets the needs of students (both majors and nonmajors), maintains the quality of instruction, and fulfills their role in educating students for a successful career in the 21st century.

[2] The years shown in the figures indicate the start of an academic year. For example, 2006 denotes academic year 2006-07 with data typically available early 2008. Enrollment for 2015-16 is based on preliminary analysis of data from the 2016 Taulbee Survey.