By Samir Khuller, University of Maryland

As computer science departments across the country grow rapidly, we all may feel overwhelmed by the staggering growth of our enrollments. While faculty growth still has not caught up with the influx of students, we cannot be anything but happy at the diversity of students who are choosing to become computer science majors. Many people may believe that alumni engagement begins after students earn their diplomas. That assumption is false. Alumni engagement begins the moment that students start their education in our departments. With planning, outreach, and genuine interest in their lives and careers, we make alumni engagement an important part of our mission in the Computer Science department at the University of Maryland (UMD).

A Home for Alumni

While our effort has involved significant work, it has been really fun. Many folks in the department have worked together on common initiatives such as student recruitment events, faculty-hosted parties, alumni events, and more. To me, this collaboration was very exciting to see, and I am still amazed by our ability to work so hard and effectively together. While the start of our reconnecting with alumni was the planning for the 40th anniversary of the founding of our department, alumni engagement eventually took on a life of its own. Since becoming a professor at the University of Maryland, I have loved interacting with my former students. I am in touch with nearly all of them and, for me, alumni engagement is just spreading that sentiment a little bit further. I strongly believe that the CS department is their home and the best place for alumni to reconnect with old friends.

While planning the 40th anniversary party three years ago, the department reached out to several thousand alumni, created an alumni mailing list, and invited them all back to the campus. Since that time, we have hosted a variety of dinners, campus events, and receptions across the country. The goal of these events was to reconnect alumni with each other and with us. While the 40th anniversary party was an impetus for our efforts, we continued to discuss ways to make sure that our alumni know that we are interested in their lives and fully invested in their professional success.

At one point during this process, on a visit to a west coast company, I was quite surprised to discover that two alums belonged to the same team, but they had no idea that they were both UMD CS graduates (one from graduate school, the other undergraduate) or that they had attended UMD at the same time. That incident underscored for me the importance of bringing alumni together. Our alumni should know each other, and they should form social and work connections. We want our students to be proud of the education that they have received at UMD and to recognize that excellence in each another. Many former students now tell me that when they moved to a new area they hardly knew anyone, but these alumni-oriented events helped them reconnect with old friends, and helped them to make new ones.

In addition to hosting events, we also developed several other alumni engagement strategies. We send departmental updates multiple times a year, give awards to alumni for their contributions to the field of computing, and recently built an alumni wall of fame. This helps our current and future students understand that we are very invested in their careers.

Our story about the building of the Iribe Center at UMD started with a tragic day in June 2013. Alumnus Andrew Reisse was killed in a car accident while walking in a crosswalk on his way back to work at Oculus, which was then a small virtual reality startup, in Irvine, California. At Reisse’s memorial service several days after the accident, Stacey Locke, UMD’s senior director of development, and I met Oculus CEO Brendan Iribe and Oculus chief software architect Michael Antonov, both of whom are alumni, and many of Andrew’s family and friends, who mentioned that they were interested in founding a scholarship in his name. We kept in touch with Iribe and Antonov.

In February 2014, we invited Iribe and Antonov to visit the department for a day, before they gave an opening keynote address for Bitcamp, our student-run hackathon. About two weeks before their visit, Facebook announced that it was purchasing Oculus for $2 billion. Worried that Iribe and Antonov would cancel their campus visit due to much larger personal and business concerns, Locke contacted Iribe’s assistant and learned they had no plans to cancel. After a tour of our facilities during that visit, Iribe recognized our need for space and how we could really benefit from a new building. He stated that he was now in a position to help us and expressed his interest in creating a new home for the computer science department with a $30 million gift to create the Iribe Center. As it turned out, he was not the only person interested in helping.

More than 100 of our alumni came together to make the dream of a new building a reality. They made donations, established scholarships, and reconnected with the department in ways that I didn’t think were possible. For example, they have recruited interns, mentored students, and hosted dinners at their own homes. We have grown as a community and continue to keep in touch. And we know that we have to learn about our undergraduates and graduate students while they are here with us, so that we can continue developing our relationships with them after they graduate. Again, this has involved sponsoring student events, such as hackathons, and organizing more social events.

Thanks to generous contributions from alumni and dedication from faculty and staff, we broke ground on the Brendan Iribe Center for Computer Science and Innovation last July, and it is scheduled to open in fall 2018. At that time, the gleaming $150 million facility will be one of the first buildings that visitors see at the university, a 215,000-square-foot building located at the front gates of our campus. The Iribe Center will be an integrated space for classrooms, faculty, staff, and graduate student offices, along with space for labs, collaborative work, and a 6,000-square-foot makerspace. The building will feature the 300-seat Antonov Auditorium, as well as a rooftop park named for Andrew Reisse. We fully expect that this new space will support our rapidly growing undergraduate student population, our graduate students, and our (we hope) additional faculty. We plan to have a lot of collaborative spaces, which we hope will give our students and faculty the opportunity to showcase their projects. 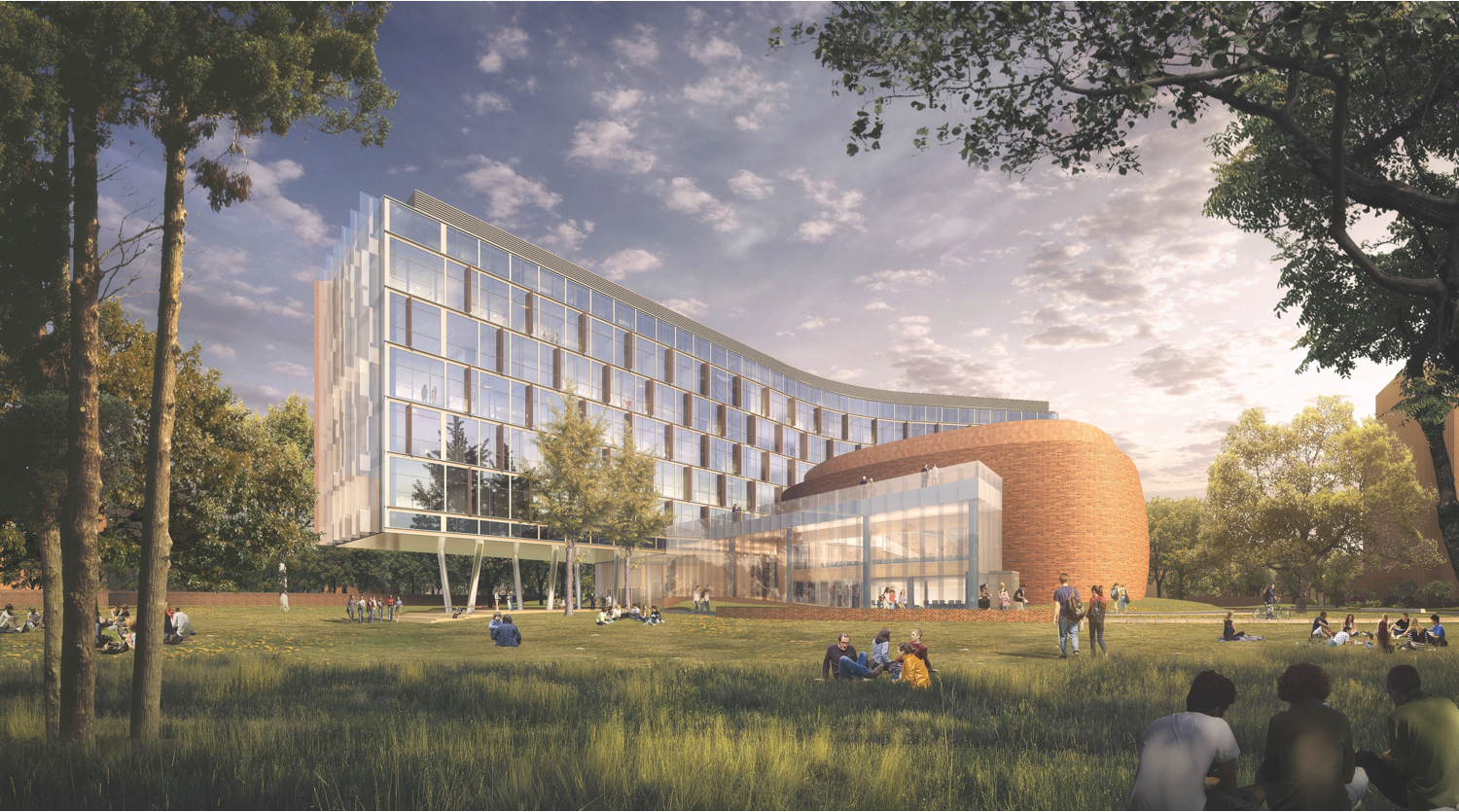 Inspiration From Other CS Departments

While planning the new building, we visited several campuses and inspiring CS departments including Carnegie Mellon University (Gates and Hillman Centers), University of Washington (Paul Allen Center), University of Texas at Austin (Gates-Dell complex), and Cornell University (Bill & Melinda Gates Hall). Every one of these buildings is slightly different, of course, but a few common themes emerged. It is very important to design spaces to maximize interaction, which is a feature our current building lacks. We currently have no “center” in the A. V. Williams Building. It resembles a sprawling octopus without a head as though it was designed to minimize interaction!

This brings me to another point: Spaces are a critical component in driving the culture of a place. There are spaces that are inspiring and collaborative, and spaces that are dull and minimize interaction. This lack of a center at the A. V. Williams Building makes it difficult for people to meet and talk. One example is the Bytes coffee shop, which has no seating near it. As a result, people take their food or coffee back to their desk and don’t engage with each other at all. Also, the location is not ideal. If a colleague and I visit it about a minute apart, we are unlikely to run into each other.

We hope that our new building will help us further foster a culture that is open and collaborative, one that matches the architectural design of the space that we so desperately need. The building project has received huge support from the state of Maryland, college administration (especially president Wallace Loh and our provost Mary Ann Rankin), and the facilities department. Hundreds of alumni have rallied to support this goal, and we have received significant financial and logistical support from the faculty. Our space committee who has worked tirelessly and closely with HDR, Inc., our architectural firm, and Whiting-Turner, the construction firm, to see this project through. The space committee co-chairs, professor Neil Spring and professor Jeff Hollingsworth, have worked overtime on the design and providing feedback to architects and working with Ben Clarke and Bob Martinazzi from campus facilities. Emeritus professor Bill Pugh and I have worked very closely with Locke (university relations), the project’s lead fundraiser.

In summary, this is a major undertaking for any department, but it will have a critical impact for our faculty, staff, and students. It is well worth the effort. The building project has helped connect us with our alumni, and has also brought the department together to work toward a common goal.

In the next decade, our aspirations are to create a space where we have significant participation in hackathons and events, not just from CS students, but from students all over campus who come to witness the underpinnings of the technology that impacts their daily lives (and which they usually take for granted). We hope that the resulting impact will affect thousands of UMD students, and we hope to see extensive research collaboration between CS and other departments, especially the Maryland Robotics Center, as well as other labs in the Iribe Center.

The four keywords I use to describe our new building are “dream,” “learn,” “innovate,” and “collaborate.” I hope to issue the next post while sitting in my new office in the Iribe Center.

Samir Khuller is chair of the computer science department at UMD. He received his Ph.D. from Cornell University. His research interests are in graph algorithms, discrete optimization, and computational geometry. He has published approximately 150 journal and conference papers, and several book chapters on these topics. He is an associate editor for the journal Networks, and served on the ESA Steering Committee from 2012-2016. He has received the National Science Foundation’s Career Development Award, several department teaching awards, the Dean’s Teaching Excellence Award, and a CTE-Lilly Teaching Fellowship, among other honors.

Videos Available: De Lange Conference on Humans, Machines, and the Future of... 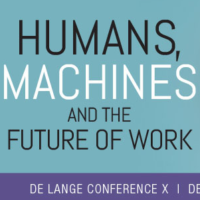 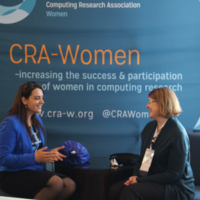