ZDNet covers the drop in tech-related doctoral degrees in an article today that quotes CRA Board Chair Jim Foley. The article cites some reasons for the current downturn in doctoral degrees, including declining interest in the sciences among Americans, a temporary shift in the labor markets, and financial disincentives to pursue science and engineering doctorates. It also quotes folks like Foley, Intel’s Craig Barrett, and Wayne Johnson of HP Labs, noting the importance of the doctoral degree to American innovation.
The article also quotes Ron Hira, now a professor of public policy at the Rochester Institute of Technology, as casting some doubt on the seriousness of the problem:

[Hira] suspects anxiety over science and engineering doctorates is a diversion from the offshoring trend of shifting work overseas. “There’s a perception we’re in a competitive crisis,” he said. “The competitive and innovation (argument) has been introduced by companies that want to take offshore outsourcing off the table.”

I’m not sure that’s the case. While it may be true that the general concern about S&E degrees might be overstated, that is not the case with IT-related degrees. Projections from the Bureau of Labor Statistics show that over the next 10 years, no science occupation, and indeed, no other “professional and related” occupation will grow as fast (and few occupations will add as many new workers) as IT-related occupations. Here’s a chart produced by John Sargent, a senior policy advisor at the Department of Commerce, that illustrates the point: 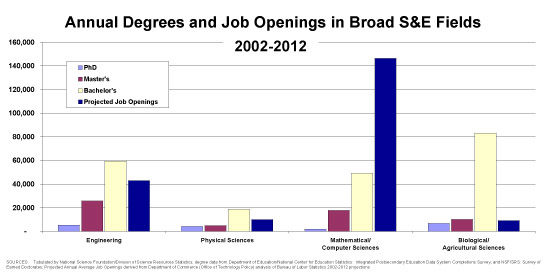 Even factoring the trend towards outsourcing into their models, BLS still projects the U.S. will add 1.6 million new jobs in IT-related fields — the vast majority of these requiring a bachelor’s degree or higher. Degree production is well short of that pace….
[A full set of Sargent’s slides on the US S&E Workforce and Offshoring is available here.]