Retired Chairman and CEO of Lockheed Martin, Norman Augustine, testified today before a House Committee on Education and Workforce hearing on “Challenges to American Competitiveness in Math and Science.” Augustine, who has also been the former Undersecretary of the Army and a past-chairman of the National Academies of Engineering, put together a great written statement from which I thought I’d cite some snippets.

In addressing the future quality of life in America one cannot help but notice warnings of what appears to be an impending Perfect Storm. The elements which underlie this possibility are, first, the pervading importance of education and research in the fields of science and technology to America’s standard of living, and the disrepair in which we find many of our efforts. Second, the precipitousness with which a lead in science and technology can be lost. Third, the prolonged period of time it takes to recover once a lead has in fact been lost, if indeed it can be regained at all.
…
What, then, must America do? There is but one answer: We must compete. And we must do so while suffering a disadvantage in the cost of labor. We must be more innovative than ever before; we must have a vastly better K-12 educational system then we now have; we must unburden our companies from excessive regulation, litigation and health-care costs; we must significantly increase our federal investment in research.

In between the ellipsis there, he makes a compelling case that the US is at real risk for ceding it’s dominant position in science and technology and the benefits that leadership accrues. I’ve uploaded the testimony (pdf) (it doesn’t seem to be on the committee site yet), so read the whole thing for more details. His testimony lists eight specific recommendations for addressing the problems:

A number of interesting ideas. Augustine’s voice adds to a growing chorus of voices coming from decidedly industrial backgrounds — Craig Barrett of Intel and former Gov. John Engler of the National Association of Manufacturers are two other recent examples — that are really giving some impetus to efforts to increase federal support for basic research, especially in the physical sciences. The issue — as we say here in DC — has some traction. Unfortunately, there isn’t much room to maneuver in the current budget environment, so significant increases are still unlikely. But the longer the chorus continues, and the louder it becomes, the more pressure there will be to address the concerns in future budget cycles.
To that end, I meant to include a note here last week about efforts by Rep. Frank Wolf (R-VA), Chair of the Appropriations Subcommittee for Science, Commerce, Justice, State; Rep. Sherwood Boehlert (R-NY), Chair of the House Science Committee; and Rep. Vern Ehlers (R-MI), Chair of the Science Subcommittee on Environment, Technology and Standards; to include a provision in the recently passed supplemental appropriations bill that would fund the convening of a “National Innovation Summit” this fall. The purpose of the summit is, according to Wolf, “to bring together the nation’s best and brightest to help develop a blueprint for the future of American science and innovation. It also will look at where there has been slippage and why, and what needs to be done to reverse the trend.”
The summit was inspired by the work of the Task Force on the Future of American Innovation (of which CRA is a member and we’ve mentioned a few times in this space). Key to the summit’s moving forward is the involvement of several very influential industrially-oriented groups — including the National Association of Manufacturers, the American Electronics Association, the Business Roundtable, and the Council on Competitiveness. They make a compelling case to those in Washington not terribly swayed by the voiced concerns of academics over the state of federal support for research.
So it’s heartening that they all find themselves heavily engaged in this overall effort to advocate to greater support for basic research, and even more heartening that their engagement is capturing the attention of lawmakers on the Hill. However, at this point, the enthusiasm for this case is not shared by the President’s science advisor, John Marburger. In recent weeks, Marburger has found himself on the defensive about these concerns that the U.S. is putting it’s future competitiveness at risk by underinvesting in the physical sciences. He gave a fascinating interview (sub. req’d) to National Journal’s TechDaily last week in which he lashed out at groups like the Task Force for trying to benchmark US competiveness against international competition.

TechDaily: It’s rare in Washington that you get as many groups agreeing on one set of data and one position. They’re all saying the same thing: We are at risk of losing our innovative edge. You seem to have some problems with that position.
Marburger: I would put it differently. I would say we have to be vigilant and we have to spend our money wisely, and we have to make priorities. And we have to learn what this new economy means. And we can’t be lax. Are we in danger? We’re not in any kind of danger we haven’t always been in, namely missing the future and what it’s all about. But we’re very well prepared to face that future. We are going into this enormous global change in technology-based economies with a very high level of accomplishment and capability and we’re going in as the leader.
OK. So what is the country going to do? What is a rational approach for the administration? The United States has enormous capabilities to make changes in the world. This administration has well-defined priorities, they are big challenges. We had a shock we didn’t expect from [the Sept. 11, 2001 terrorist attacks] that caused us to incur enormous burdens on our economy and despite that, billions of dollars in new funding, permanent new funding, have been invested in the technical fields, in R&D. There’s just no question about that. The basic sciences include the physical sciences.
You can define deflators and denominators to the funding numbers to get conclusions, but I don’t think that anyone can disagree with the concept that this nation has placed a very high priority on basic science that that’s going to pay off. As the indicators come in after 2001, I expect them to show an impact in publications, in graduation rates, in patents and licenses. I expect those types of indicators to go up in absolute terms. They have to go up because of the enormous money that has been pumped into these areas.
So, let’s be realistic about this. Even in this year’s budget. This is the first year the administration is really trying to cut the deficit. It’s cutting all of the domestic discretionary programs — except for science. It has left it alone at the top of a base that has been deliberately built.

As we’ve pointed out before, Marburger uses some number tricks as well in his answer. He claims “billions of dollars in new funding, permanent new funding” that have been invested in “the technical fields, in R&D. There’s just no question about that. The basic sciences include the physical sciences.” But this is odd logic. 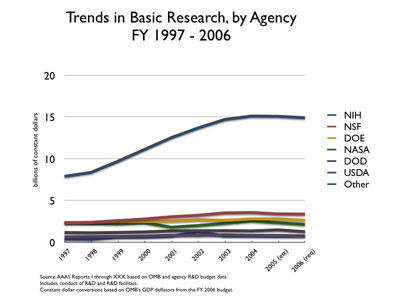