One of the most effective “tools” the science advocacy community has in making the case for federal support of science is, well, scientists. Those occasions in which researchers are able to sit down with Members of Congress and discuss their own work do more to advance the cause of science than five meetings with staff like me. There are a couple of reasons for this. One, scientists tend to be pretty smart and well-spoken. They’ve thought a lot about their work and usually understand how to explain it to lay people (despite the usual stereotypes about scientists, it’s a rare exception to this rule). More importantly, they’re usually pretty good at conveying why their work matters, and to do it in a way that makes any passion they feel for the research palpable. If they have the opportunity to spend 5, 10, 15 minutes with a Member, it’s pretty good odds that Member will leave the meeting with a better appreciation for the work and a sense of connection to the researcher.
And that’s no small thing. When the time comes to make decisions about priorities, a Member’s personal connection to a researcher, an understanding of what research goes on in his or her district, and an understanding of the long-term benefits of that research all can help swing the balance in favor of science. They are by no means the only factors that go into that decision, but they’re certainly weights we want to have on our side of the balance.
So I’m especially pleased to point out occasions when members of our community take time out of their schedules to spend time in Washington, mingling with policymakers and trying to convey a little of what it is they do. One occasion CRA tries to take advantage of every year is the Coalition for National Science Funding’s Capitol Hill Science Exhibition and Reception, held this year on June 7th.
Each year, CNSF brings together 30-35 of its members to stage a science fair of sorts on Capitol Hill for Members of Congress and their staff as a way to highlight the important and interesting work enabled by the federal investment in basic research at the National Science Foundation. This year, CRA was well-represented at the Exhibition by Lucy Sanders and Katie Ertz from the National Center for Women and Information Technology (NCWIT). 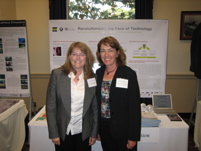 The NCWIT display occupied a unique niche at this year’s exhibition. While the great majority of booths highlighted particular research efforts of NSF, NCWIT’s was one of the few (if the only) to focus on NSF’s broader role of developing the science and engineering workforce. In particular, Lucy and Katie were able to bring some attention to the continued need to focus on increasing the participation of underrepresented populations within that workforce. 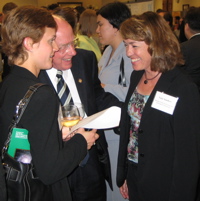 The event was quite well-attended and Lucy and Katie found a number of willing listeners among Members of Congress (like Rep. Vern Ehlers (R-MI), seen at left), key congressional staffers, and a surprising number of agency personnel. There were times when it was quite difficult to move around the room, the bodies were packed so tightly. CNSF counted more than 300 attendees this year, including six Members of Congress, despite a very busy day in the House — a very encouraging symbolic display of support for science.
Thanks to Lucy and Katie for their willingness to travel to DC and participate and for making the case so effectively. They join a growing list of CRA member institutions who have participated in CNSF Exhibitions, including James Hendler and his colleagues from the Mind Lab at the University of Marylandin 2005, DK Panda and his students from Ohio State University in 2004, Tim Finin and his colleagues and students from the University of Maryland Baltimore County in 2003, and Thad Starner and Janet Kolodner of Georgia Tech in 2002. If you’re at a CRA-member institution and are interested in showing of your NSF-sponsored research at a future Hill event, drop me a line!
This is also a reminder that it’s not too late to participate in CNSF’s upcoming Fall Congressional Visits Day, scheduled for September 13, 2006 (with an orientation session on September 12th). This is a great opportunity to make sure computing researchers are represented as the research community goes up to the Hill to speak with one voice about the importance of the federal role in supporting research. CRA’s Melissa Norr has all the details.