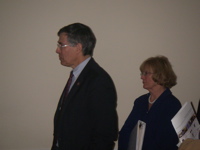 Comer discussed the Measuring the Moment report issued last year by the Task Force and gave an overview of the continued importance of federal funding for basic research to the economy as a whole.
As one of the Rising Above the Gathering Storm authors, Dr. Mote discussed the impact the report has had and what is still undone. He emphasized that the states need to be actively engaged in support of basic research at the university level and vocal about their support to their federal delegations.
Burke presented a specific picture of why federally funded basic research is important to Texas Instruments and how that translates to industry as a whole. She gave specific examples of technologies that have had major economic impact and were begun through basic research. 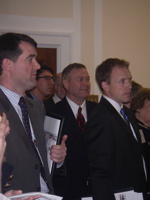 Maybe just as importantly, each attendee left with a copy of the Benchmarks report (pdf) and other Task Force material and at least one Member of Congress was seen toting the report around later that day….
All in all, a good, well-attended event.