On Tuesday (Nov. 13th), the President signed the FY 2008 Defense Appropriations conference report, making that bill the first of the twelve FY 08 appropriations bills necessary to fund the continued operation of government to grind its way through to passage (it’s now P.L. 110-116). The Defense bill includes just over $77 billion in funding for Defense Research, Development, Testing and Evaluation (RDT&E), an increase of 2.0 percent over FY 07 and 2.9 percent above the President’s requested level for FY 08. Included within that RDT&E account are pretty substantial increases over the President’s request for basic and applied research efforts in some areas of interest to the computing community — and more modest growth in others. At the same time, overall funding for the Defense Advanced Research Projects Agency (DARPA), will see a decline in FY 08 vs both the President’s request and the FY 07 level.
We’ve whipped up a handy chart to show some of the detail for selected basic (6.1) and applied (6.2) research accounts. While the chart tells much of the story, it doesn’t explain everything going on with funding. For that, your best bet is to take a look at the conference report itself (pdf). The section of interest is “Title IV. Research, Development, Test and Evaluation,” that begins on page 243 of the PDF. It details the program level changes to each line item for the Army, Navy, Air Force and “Defense-wide” programs. It’s a lot to digest. 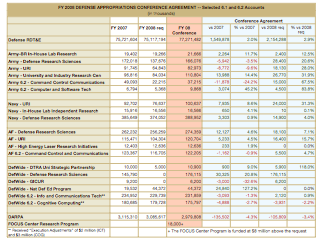 In general, what our chart above shows is that the research programs of note in the service labs got more than they asked for in FY 08, but that the defense-wide accounts (primarily DARPA) didn’t do quite as well. When you compare the funding levels to FY 07, the gains aren’t as significant (generally). But there’s a bit of a budget game going on here that tends to obfuscate actual gains and losses in each account. [Warning: budget wonkery follows.] As readers of this blog probably already know, the FY 07 level represents the funding level after Congress finished its work on last year’s DOD appropriations bill. The FY 07 final number represented an increase in most accounts over the President’s budget request for FY 07. The Administration labels most of those increases “earmarks,” especially if those increases are targeted to very specific programs or performers. When the President prepares his budget request for the next year (in this case, FY 08), he strips out as many of those “earmarks” as he can justify. This is why the defense request always seems like a cut compared to final enacted level for the previous year. As the request works its way through the appropriations process, the cycle repeats and much of that funding gets added back in by Congress, making it appear that there are increases in those accounts. And indeed there are…it’s just that many of those increases probably are earmarks for very specific programs or performers.
So, while these increases look pretty healthy when compared to the President’s budget request (shorn of earmarks, as it was) — and we certainly like to see more money in these accounts — ideally, we’d like to see those increases in the form of additional money for competitive, merit-based research funding. At this point, it’s tough to tell how much of these increases fit that description, at least in the 6.2 accounts. In the 6.1 accounts, it’s reasonable to assume that much of the increases found in the bill represent additional competitive funding.
One change to the appropriations bills this year has made it a bit easier to see who to credit for some of the increases to defense basic research accounts. New rules on transparency in the Senate mean that every change to the budget estimate called for in the bill gets credited to someone, so you can see who requested it in the Senate committee report. So, for example, we know that we owe thanks for the non-earmarked increases to the University Research Initiatives in the bill to Sens. Bayh (D-IN), Clinton (D-NY), Collins (R-ME), Johnson (D-SD), Kennedy (D-MA), Kerry (D-MA), Levin (D-MI), Leiberman (D-CT), Pryor (D-AR) and Stabenow (D-MI). Hopefully the House Appropriations Committee will follow through with “Requested by” language in their future bills. [end of budget wonkery]
Two accounts that don’t seem to fare particularly well in the bill are DARPA IT accounts — the Defense-wide Information and Communications Technology program (which will see a decline of 1.3 percent, about $3 million, vs. FY 07) and Cognitive Computing (which will see a decline of about 2.7 percent, or $4.9 million) in FY 08. As you can see in the chart, compared to the President’s budget request, ICT will increase slightly (0.9 percent, or $2.1 million), and Cognitive Computing will decline slightly (2.2 percent, or $3.9 million). Much of the reason for this decline is attributed to an “execution adjustment” by the appropriations committees. In other words, DARPA wasn’t spending the money it had previously been appropriated in a timely enough fashion, so the appropriators adopted a “use it or lose it” mindset and “reclaimed” that money for other accounts in the bill.
This is the same reasoning for much of the overall cut to DARPA in the bill. DARPA will see a decrease of $135 million vs. FY 07, or about 4.3 percent less in FY 08. Compared to the President’s request for FY 08, the agency will see a $106 million cut, or 3.4 percent. The appropriators and the DARPA leadership are of two minds on the reasons for slow spend-out rate for some DARPA programs. The DARPA leadership contends it’s acting as a good steward of taxpayer dollars, only paying grant-recipients when key milestones are met. However, the appropriators (and some on the Armed Services Committees, as well), contend that what’s really happening is a bottleneck in the Director’s office — that micromanagement of programs is slowing execution. Regardless of the actual cause, the fact remains that DARPA isn’t spending all the money it’s been appropriated and so the appropriators — who control the purse strings — have adjusted DARPA’s budget accordingly.
With the Defense bill finished, Congress is left with 11 bills to complete before closing the book on FY 2008. Only one other bill, the Labor/HHS/Ed appropriations, has been sent to the President, and it was promptly vetoed (a veto subsequently upheld, just barely, in the House). The Labor/HHS/Ed bill, which includes funding for the National Insitutes of Health and the Department of Education, came in about $9.8 billion over the President’s desired “cap” for the bill, earning his veto, and Congressional Democrats weren’t able to entice enough Republican members to vote to override (they fell 2 votes short in the House). The Democratic leadership figures to attempt to meet the President “halfway” with an omnibus package of unfinished bills before the year’s end, but it’s not clear whether they’ll get sufficient Republican support to force a compromise. It’s also not clear what a “halfway” package might mean for the hard-won gains for science contained in some of the unfinished bills, including the Commerce, Science, Justice bill (House / Senate).
Congress has until December 14th before it will have to pass yet another stopgap spending bill to keep the government operating (the Defense Approps bill included a “continuing resolution” to keep government operating without additional appropriations through Dec 14th — the FY 08 fiscal year began Oct 1, 2007.) Whether they manage a compromise by then is anyone’s guess, but the consensus around town is a deal is likely by Christmas. And when it happens, we’ll have all the detail here.