We’re releasing today the “Computing Degree and Enrollment Trends” portion of CRA’s annual survey of its member departments, the CRA Taulbee Survey, and are pleased to report that for the second straight year, the number of undergraduate students enrolled in computer science departments, and the number of new majors in computer science, have both increased for the second straight year.

We think this says some very positive things about students’ perceptions of a career in computing. And maybe that’s not surprising. Computing careers are projected to be the fastest growing professional occupations over the next decade. They are among the tops in salary and ranked as some of the best jobs in America. And they’re filled with tremendous intellectual excitement and the opportunity to change the world.

The report contains enrollment and degree production statistics for Bachelor’s, Master’s and Ph.D. computer science, computer engineering and information fields. The statistics are gleaned from our survey of 265 Ph.D.-granting departments, which has traditionally correlated well with NSF’s less timely but more comprehensive survey of all graduate and undergraduate institutions, the Science and Engineering Indicators.

Here’s the press release we’re issuing to announce the report. (The report in can be downloaded here.)

Growth Reverses the Steep Decline in Enrollment of the 2000’s

Washington, March 24, 2010 – The number of undergraduate students majoring in computer science significantly increased for the second year in a row according to the Computing Research Association (CRA). The upward trend reverses the steep decline experienced in computer science enrollment during the 2000‘s. CRA reported these trends as part of the 2008-2009 annual CRA Taulbee Survey. This growth in student enrollment comes as recent government projections highlight computing careers as among those expected to grow the fastest over the next decade.

“The best and brightest students recognize that computer science is a field that offers tremendous intellectual excitement, great job prospects, and the ability to change the world,” said Dr. Eric Grimson, Chair of CRA. “The ability to earn high salaries and receive good job opportunities undoubtedly plays an important role as students decide to major in computer science. As these students graduate, the U.S. tech industry will gain an enormous competitive advantage in future research and development.”

“This upward surge proves that computer science is cool again,” said Grimson. “Computers, smartphones and online social networks are a daily part of young people’s lives. It should come as no surprise that today’s students want to learn more about computing.”

•    Total enrollment by majors in computer science is up 5.5 percent over last year. Computer science enrollment increased 14 percent cumulatively over the previous two years, reversing a steep decline since 2002. 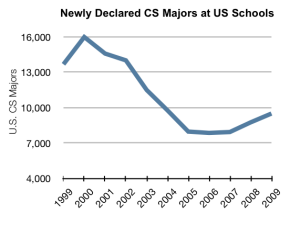 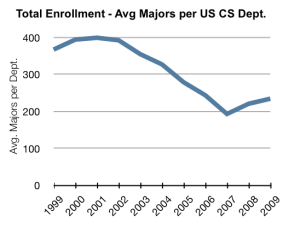 According to the U.S. Bureau of Labor Statistics (http://www.bls.gov/), computer science graduates earn higher than average salaries, employment growth in computer science is expected to be much faster than average and job prospects should be excellent. The BLS also projects that computing occupations are likely to grow by 22.2 percent between now and 2018, the fastest growing cluster of all professional occupations.