The House Science and Technology Committee is marking up today its version of a reauthorization (pdf) of the America COMPETES Act – the act that, when passed back in August 2007, marked the culmination of several years of effort to convince Congress and the Administration of the importance of buttressing support for federal investments in the physical sciences and STEM education. COMPETES provided authorizations for three key federal science agencies – the National Science Foundation, National Institute for Standards and Technology, and the Department of Energy’s Office of Science – setting targets that would help put those agencies on a path that could see their budgets double over 10 years. 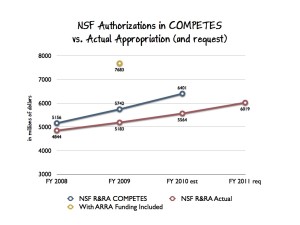 NSF's appropriations have never really reached the levels authorized in COMPETES, but the trend is at least in the right general direction.

The new bill reauthorizes the same key agencies as in the original COMPETES and adds an authorization for ARPA-E, the DARPA-like advanced research agency located in the Department of Energy that was originally enacted by COMPETES. In addition, the bill incorporates the Networking and Information Technology Research and Development Act of 2009, which we supported when it was originally passed as H.R. 2020 back in June 2009. That bill would require the agencies participating in the federal government’s NITRD program to develop a strategic plan and review progress against the plan annually; encourage coordination between the participating agencies; require the program to support R&D in cyber-physical systems, HCI, visualization and information management; and call on NSF to improve IT education to encourage the participation of women and underrepresented minorities.

The COMPETES Authorization also includes a reauthorization of the the National Nanotechnology Initiative, it establishes postdoctoral fellowships for STEM graduates to pursue STEM education research, it halts a planned consolidation of all NSF undergraduate broadening participation programs until the agency can provide a plan clarifying the objectives and rationale for the decision, it creates an advisory committee on STEM education, and a host of other provisions relating to programs at DOE, NIST and NSF. You can check out the full 225 page bill here.

The markup appears to be headed for a marathon session. The committee has before it at least 54 planned amendments, with the minority suggesting more are coming. It’s not likely that the bill will change substantially when all is said and done, but if it does, we’ll have the details here. We’ll also have a complete breakdown of the final authorization levels in the marked up bill as well as an outlook for its eventual vote in the House (House S&T Chairman Bart Gordon (D-TN) hopes to have the bill on the floor before the House takes its Memorial Day break.)

The Senate has also begun work on its version of the COMPETES Act, though progress there lags the House considerably. With some luck, staffers on the Senate Commerce, Science and Transportation Committee hope to have a bill ready for markup by Memorial Day, with consideration in the full Senate sometime later this summer. The hope in both chambers is to have COMPETES wrapped up well before Congress turns all of its attention to appropriations in September and the upcoming mid-term elections. We’ll follow all the progress here….