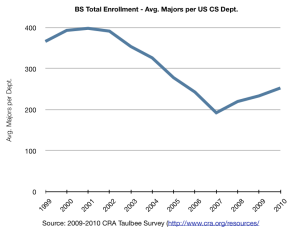 increased 10 percent in 2010, data from the most recent annual CRA Taulbee Survey show. This is the third straight year of increases in total enrollment and indicates that the post “dot-com crash” decline in undergraduate computing program enrollments is over.

The CRA Taulbee Survey is conducted annually by CRA to document trends in student enrollment, degree production, employment of graduates, and faculty salaries in Ph.D-granting departments of computer science (CS), computer engineering (CE) and information (I) in the United States and Canada. CRA today released the enrollment and degree production results (available as a pdf) from the latest edition of the survey. 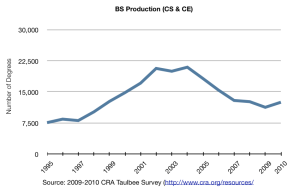 Also notable from the survey:

The full report, which also includes information about faculty size, demographics and salaries, graduate student support and research expenditures, will be available in May 2011 on the CRA web site.