The Computing Research Association recently published the results of its annual Taulbee Survey, and the numbers of PostDocs rose to record levels, continuing a trend that we have witnessed for more than a decade — and bringing new meaning to the CRA’s PostDoc white paper effort.

As we have blogged here before, CRA — the umbrella organization of the CCC — initiated an effort last fall to engage the community in a conversation about PostDocs, at a time when a growing number of new CS PhDs appeared to be going that route. A committee commissioned by CRA prepared a white paper reporting the statistics associated with academic and industry hiring, with the aim of providing a starting point for further discussion throughout the community. The white paper was posted online on Feb. 2 – https://cra.org/postdocs — and we have received some comments on the companion web forum.

Based on this year’s Taulbee Survey data, the three-year rolling average for the number of new PhDs pursuing PostDocs rose from 159 in 2009 to 218 in 2010 — an increase of 37% in just one year. That’s on top of a tripling in the number of PostDocs observed during the 12-year period from 1998 through 2009, as reported in the white paper, suggesting that the trend toward PostDocs is not only continuing but perhaps also accelerating.  Meanwhile, the number of new PhDs who pursued tenure-track faculty appointments declined yet again, from 151 in 2009 to 137 in 2010, or 9% (three-year rolling averages). (The numbers of new PhDs pursuing other positions, including teaching and research appointments in academia, positions in industry, etc., remained essentially flat.)

Here’s a graph showing the hiring of new computer science PhDs from U.S. and Canadian universities from 1998 through 2010 (three-year rolling averages): 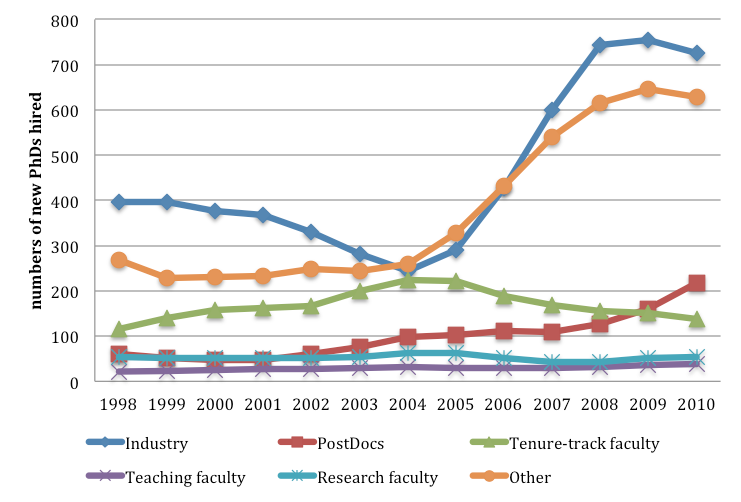 And taking a closer look at just the academic positions: 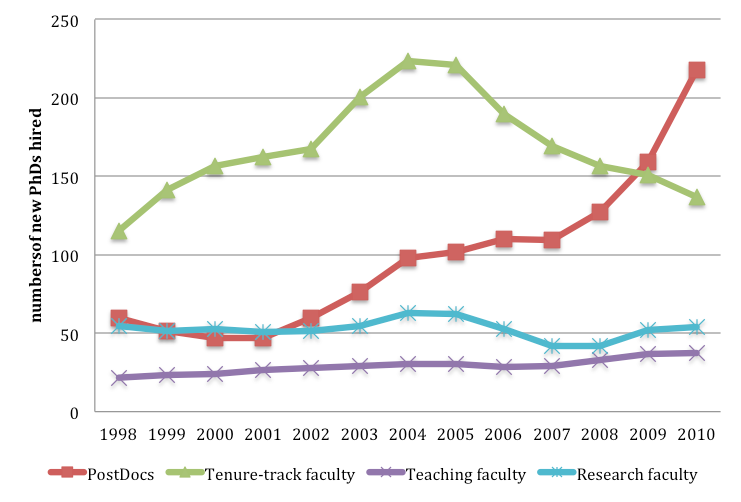 (For comparison purposes, these graphs are updates to Figures 1 and 2 in the original white paper.)

We Need Your Input

What do you think about these trends — and the implications for PostDocs, graduate students, faculty, universities, companies, and the field as a whole? Please discuss the white paper with your colleagues within your departments and labs — and post your views about this trend and PostDocs generally on the companion web forum: https://cra.org/postdocs. Some things to consider:

Your input is immensely valuable, as the committee will soon compile and articulate the consensus of the community, if any, on this issue.