As we noted yesterday,  science agencies were among the winners in the President’s budget request. The National Science Foundation “fared very well,” according to Director Subra Suresh, garnering an increase in the President’s plan of $340 million or nearly 5 percent compared to FY 12 final levels. Computing research, in particular, did even better.  The agency’s Computer and Information Science and Engineering directorate (CISE) — the home for fundamental computing research at the agency — would see an increase of 8.6 percent in the President’s plan, the highest percentage increase among all the major science directorates. 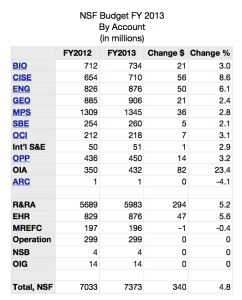 How does computing warrant this seemingly preferential treatment? In large part, the reason lies with the agency’s new priorities — a suite of mostly-new initiatives announced by Suresh under what he called the new “OneNSF Framework.” In each, computing plays a key, or even foundational, role:

While some of this funding represents research already funded under different programs — for example, CISE already supports research in CEMMS through the ongoing work in Cyber-physical Systems National Robotics Initiative, as well as through the now discontinued Cyber-enabled Discovery and Innovation program — much of it is new money for the directorate. In addition, the directorate is funneling $17 million from three programs that have ended (Network Science and Engineering (NetSE), Social-Computational Systems, and the Interface between Computer Science and Economic and Social Sciences (ICES), into core CISE research areas. This process of identifying new initiatives, securing new funding for them, letting them run their course, then ending them and folding that money back into the CISE core is key to growing the CISE budget, and really the Foundation budget, over time.

So what do the newly announced OneNSF initiatives mean for CISE and computing researchers? Here’s how they break down:

Cyber-enabled Materials, Manufacturing, and Smart Systems (CEMMS) — The overall goal of CEMMS is to accelerate advances in 21st century smart engineered systems — systems that sense, respond, and adapt to the environment. CISE, partnering with NSF’s Biological Sciences, Engineering, Mathematics and Physical Sciences, and Office of Cyber Infrastructure, hopes to establish the scientific basis for engineered systems interdependent with physical world and social systems, model and simulate them in full complexity and dynamics, and develop a technology framework. In doing so, they’ll leverage ongoing research in their CPS and NRI activities.

Cyberinfrastructure Framework for 21st Century Science and Engineering (CIF21) — Aims to accelerate the progress of scientific discovery and innovation. CISE’s contributions include investments in Advanced Computational Infrastructure (ACI) — foundational research in parallelism and concurrency, as well as distributed systems at scale — and to advance big data science and engineering through foundational research in managing, analyzing, visualizing and extracting useful information from large data sets.

Expeditions in Education (E2) — The goal across the Foundation is to integrate, leverage and expand STEM education. CISE hopes to focus on transforming undergraduate STEM learning though science and engineering, learning and understanding sustainability, and cyberlearning, data and observations for STEM education. CISE hopes to leverage their cross-directorate program in Cyberlearning (wit EHR, SBE, OCI), to design ways that innovative tools can be effectively integrated into learning, understand how people learn with technology, and implement new technologies into learning environments in way so that their potential is fulfilled.

NSF Innovation Corps (I-Corps) — The Foundation goal is to accelerate innovations from the lab to the market, and as one of the founding directorates in the effort, CISE plans to continue its efforts to show high-impact results from a relatively modest investment ($6 million).

Secure and Trustworthy Cyberspace (SaTC) — A cross-directorate (CISE, EHR, ENG, MPS, OCI, SBE) effort to “build a cybersecure society and provide a strong competitive edge in the Nation’s ability to produce high-quiality digital systems and a well-trained cybersecurity workforce.” The program includes a solicitation that addresses cybersecurity from trustworthy computing systems; social, behavioral and economics; and addressing the transition to practice perspective. It also includes the ongoing Scholarship for Service (SFS) program designed to increase the number of qualified students entering the cyber security field.

Science, Engineering, and Education for Sustainability (SEES) — This ongoing program aims to inform the societal actions needed for environmental and economic sustainability and sustainable human well-being. CISE sees multiple roles for computer science in SEES, including in questions of monitoring, data, scalability, addressing complexity, and behavior modeling and change, and is funding $11.5 million in research in response.

In addition to the cross-agency priorities, CISE maintains a number of CISE-level cross-cutting programs, including the Expeditions in Computing program (see this recent post on the CCC Blog), the Computing Education for the 21st Century program (which includes CISE efforts in computing education, research on teaching and learning, and broadening participation), Smart Health and Wellbeing, Enhancing Access to the Radio Spectrum (EARS), and Mid-scale Research Infrastructure, which includes increasing the “GENI footprint” and pushing ahead with US Ignite.

Finally, in his detailed briefing on the CISE directorate yesterday, CISE AD Farnam Jahanian stressed that while there’s a focus on the initiatives on this budget, the net result for the CISE “core” research areas is very positive. Put simply, as CISE grows, so grows the CISE core. And CISE will continue to grow as long as computing continues to stay relevant to national priorities and the priorities of the Foundation. Even in difficult budget climes….