As noted in a previous post, the House Science, Space, and Technology Committee’s Subcommittee on Research held a hearing on Applications for Information Technology Research and Development.

CCC Chair and former CRA Board Chair Ed Lazowska, CRA-W Chair and current CRA Board Member Kathryn McKinley, representing Microsoft, and Kelly Gaither of the University of Texas at Austin testified on behalf of the computing community and articulated the importance of federal funding for computing research.

Gaither testified first and spoke to the need for interdisciplinary research as computing is an integral piece of other research areas. She also talked about how research isn’t just about end products and discoveries but about the researchers that are supported and the opportunities researchers have because of federal funding. 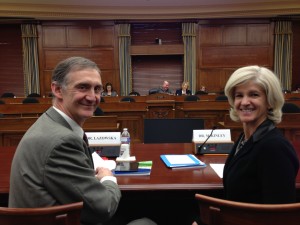 McKinley testified about the fact that computing is reaching some fundamental limits and that research is needed to make breakthroughs to overcome those limits. She noted that while the US is still leading the world in computing research, other nations are investing more and if we do not keep up, we will lose our competitive advantage. McKinley also addressed the diversity problem in computing and noted that we need far more graduates than we currently have and that we will have to attract more women and minorities if we want to have enough people to fill the needs of the future in computing.

Lazowska spoke about the NITRD program’s history and the role of computing in the US economy. He showed an NRC chart on research and IT sectors with billion dollar markets. Lazowska also talked about the need to integrate security into the building of systems and not added on at the end as a defensive measure when questioned about cybersecurity by Congressman Steven Stockman (R-TX). Stockman, who credits support from the fiscally-conservative Tea Party for his election, had the quote of the hearing, when after having pressed Lazowska for an order-of-magnitude estimate on how much additional investment in fundamental cyber security research would move the needle seemed surprised that the number PITAC requested back in 2005 was “only” $90 million. “Well, I’m interested in getting you billions, not millions,” he said, indicating he was very concerned about the U.S. vulnerability to cyber attack.

The Subcommittee members were very interested in how to tackle the education problem in computing as well as how they could help researchers address cybersecurity moving forward.