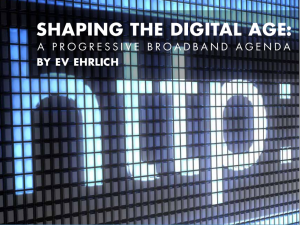 The Progressive Policy Institute recently released their report, authored by Everett Ehrlich, on the progressive policy agenda for the broadband market. The report touched on three main sections: what progressives should want from the internet, the current state of competition in the broadband sector, and what the progressive agenda should look like.

In the first section, Ehrlich discusses how the “activists” in the progressive community believe that the broadband providers have “undue market influence,” which will stifle innovation and hurt consumers in the long run. In their opinion, since  the internet can lead to social and political empowerment if harnessed correctly, regulation is a must. For progressives, the threat of market power “would not only produce economic losses, but would undermine the Internet’s existence as a source of empowerment of the individual and countervailing power for underrepresented groups in society.”

Ehrlich later dismisses that argument based on the underlying assumption that providers have too much market power. The broadband sector has many characteristics–high fixed costs, innovation as a core dimension for consumers, the “straightforward evidence” of intense competition between providers–that counter the activist argument of “undue market influence,” he states. Moreover, Ehrlich describes the sector as a “cage match”:

“There are only a few operating systems for mobile phones, only a few dominant firms in Internet search, only a few leaders in social media, and so on—these markets are far more “concentrated” than the market for connectivity. But the saving grace of the broadband sector is that all of these firms compete to be the integrator the platform, in Eric Schmidt’s term—of all the elements of the broadband experience. the multidimensional competition among signal, devices, applications, and services is more like a wrestling “cage match,” in which many participants continually form and reform alliances to gain an advantage.”

And this “cage match” competition between platforms, Ehrlich states, constantly benefits the consumers through innovation. He concludes the report with what he thinks the progressive policy agenda should in fact look like, which includes extending broadband to all Americans, creating an active market for spectrum, using broadband to revolutionize key non-market sectors of the economy, protecting privacy, and redefining the role of the FCC. This agenda “would achieve important progressive goals in a way that ‘neutrality’ and other regulatory forays cannot and will not.”

The entire report can be found here.