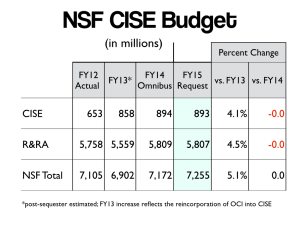 Funding for NSF’s Computer and Information Science and Engineering (CISE) directorate, the home of the great bulk of NSF’s computing research and infrastructure investments, follows a similar trajectory in the President’s budget. Under the President’s plan, the CISE budget would remain at essentially the same level ($893 million) as in FY14 ($894 million). Coming after two years in which CISE did disproportionately “well” in the budget calculus, this flat budget is a little easier to bear. But it does mean that CISE AD Farnam Jahanian had to do a little reshuffling to protect priorities within the CISE budget. In particular, the directorate’s contributions to a number of cross-agency initiatives would be scaled back somewhat in order to take care of “core” research funding within the directorate.

In his letter to the computing research community, Jahanian noted four areas of priority within the directorate request: expansions of CISE foundational research; investments in crosscutting programs led by CISE; investments in advanced cyberinfrastructure, and education and workforce development.

In addition to CISE’s investments in its core foundational research, the directorate will remain a player in a number of key cross-agency programs, albeit in a slightly reduced role in some cases. Here are some details:

Cyber Enabled Materials, Manufacturing, and Smart Systems (CEMMSS): This is a $213 million program across the Foundation geared towards accelerating advances in “21st century smart engineered systems.” CISE’s investment of $81.5 million in FY15 (down from $85 million in FY14) would focus on advanced manufacturing, cyber physical systems, the National Robotics Initiative, Critical Resilient Interdependent Infrastructure Systems and Processes (CRISP) and their interaction and synthesis.

Cognitive Science and Neuroscience: NSF’s contribution to the White House’s BRAIN initiative (with NSF, NIH and DARPA), would be $29 million foundation-wide in FY15. CISE would contribute $5.65 million vs. $3.5 million in FY14. CISE’s focus is on addressing the challenges of research integration across multiple scales and builds on ongoing NSF investments like the Collaborative Research in Computational Neuroscience collaboration with NIH, Germany and France.

Innovation Corps (I-Corps): The Foundation would invest $25 million in this program designed to accelerate innovations from the lab to the market. CISE’s contribution would grow to $10 million (up from $8 million in FY14), and Jahanian noted that given the level of interest in the program from the community, the directorate could easily invest twice as much.

Secure and Trustworthy Cyberspace (SaTC): The Foundation would spend $100 million on SaTC in FY15 under the President’s plan, and $67 million of that investment would be in the CISE directorate. The focus of CISE’s effort in this space is to support fundamental scientific advances and technologies to protect cyber-systems from malicious behavior, while preserving privacy and promoting usability.

Jahanian’s presentation from the NSF budget roll-out goes into additional detail about these programs and the other efforts the directorate plans for FY15, and the official justification to Congress contains even more detail. The President’s “Opportunity, Growth, and Security Initiative” — his supplemental budget request, should Congress feel the need to spend more than the caps they agreed to — includes $552 million in new spending for NSF, some of which would find its way into CISE for investments in cybersecurity, clean energy/sustainable computing, and core research activities. However, this is essentially dead on arrival in Congress. Sorry.