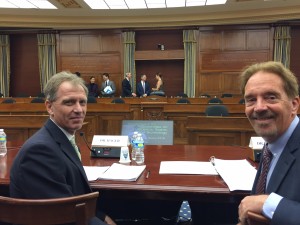 Greg Hager (left) and Keith Marzullo (right) prepare to give testimony before the House Science, Space and Technology Subcommittee on Research and Technology on Oct 28, 2015.

Experts from academia and government, including CCC Council Chair Greg Hager, told a congressional panel yesterday that the Networking and Information Technology Research and Development (NITRD) program remains a crucial part of the extraordinarily productive computing research ecosystem that has made the U.S. the world leader in IT and deserves further support.

The experts were witnesses at a hearing called by the House Science, Space and Technology Subcommittee on Research and Technology to review the status of the NITRD program in advance of possible reauthorization legislation from the committee. Hager, who also served as the co-Chair of a working group of the President’s Council of Advisors for Science and Technology (PCAST) charged with reviewing the NITRD program, presented the findings and recommendations of that review. He was joined by Keith Marzullo, who currently heads the National Coordinating Office for NITRD — coordinating nearly $4 billion annually in research investments across 19 different Federal agencies — and Ed Seidel, who heads the National Center for Supercomputing Applications (NCSA) at the University of Illinois, Urbana Champaign.

All three made the case that while the landscape for computing research has changed significantly since NITRD was first established by the High Performance Computing and Communications Act of 1991, the need for the Federal investment in long-term, fundamental research has never been more important. Hager spelled out eight key areas of research highlighted by PCAST: Cybersecurity, Health, Cyber-human systems, Privacy, IT-based Interaction with the Physical World, Data-Intensive Computing, High-capability Computing, and Foundational IT research. (You can read all three witnesses written testimony, or watch a video of the hearing, from the committee website.)

The members of the committee were largely supportive of the NITRD program, many echoing comments of Subcommittee Chairwoman Barbara Comstock (R-VA) who noted that “focusing our investments on information technology research and development is important to our nation for a variety of reasons, including economic prosperity, national security, U.S. competitiveness, and quality of life.” Encouraging more industry participation in the program was a common theme among the questions posed to the panel by the members of the subcommittee, with Republicans wondering how to use the Federal investment to leverage more industry support for long-term, foundational research and Democrats disappointed that the committee was unable to find witnesses from industry available to testify about the importance of the Federal investment. A visible show of support from representatives in industry will be an important part of making the case for Federal investment in IT research, Ranking Member Daniel Lipinski (D-IL) noted in his opening statement, adding that he was disappointed that all were apparently unavailable for the hearing.

Additional questions from the subcommittee members concerned how we prioritize between infrastructure investments and research investments, where the U.S. remains ranked worldwide in computing leadership, whether the makeup of the Program Component Areas need to be changed to reflect the changing landscape for computing research (they do).

The hearing is groundwork for any legislative action the committee might take to reauthorize the NITRD program. The House has attempted to reauthorize the program — to update the legislation authorizing its operations to reflect the current environment for research — in each of the last three congresses only to see the efforts die in the Senate. The committee appears interested in using the PCAST review to inform a fourth try soon. We’ll have more detail on that as it becomes available.