The Computing Research Association (or CRA) has been involved in shaping public policy of relevance to computing research for more than two decades. More recently the CRA Government Affairs program has enhanced its efforts to help the members of the computing research community contribute to the public debate knowledgeably and effectively.

On June 9th, the Congressional Robotics Caucus, with support from the National Science Foundation, held an all day event on Capitol Hill marking five years of the National Robotics Initiative (NRI). The event was broken up into a lunch briefing, where members of Congress and their staff would be able to hear from a panel of experts on the past accomplishment of the NRI and future challenges and benefits of continued funding of robotics research; and an afternoon exhibition of roboticists and their work, where guests were able to interact one-on-one with the researchers. CRA is a member of the steering committee for the Congressional Robotics Caucus. 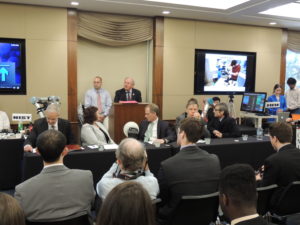 Rep. Mike Doyle (D-PA), Co-Chair of the Congressional Robotics Caucus, delivers some remarks to the audience.

Some background on the NRI: launched in 2011, the goal of the initiative is to accelerate the development and use of robots in the United States that work beside or cooperatively with people. The NRI is supported by multiple agencies of the federal government including the National Science Foundation (NSF), the National Aeronautics and Space Administration (NASA), the National Institutes of Health (NIH), the U.S. Department of Agriculture (USDA), the U.S. Department of Energy (DOE), and the U.S. Department of Defense (DOD). The purpose of the program is to support the development of the next generation of robotics, to advance the capability and usability of such systems and artifacts, and to encourage existing and new communities to focus on innovative application areas. It addresses the entire lifecycle from fundamental research and development to manufacturing and deployment. In its first five years, the NRI has awarded more than $150 million to support over 230 projects in 33 states. 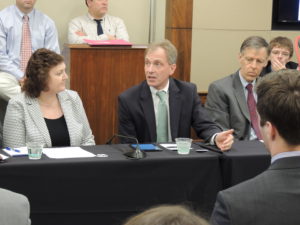 The lunch briefing had a distinguished list of panelists to speak on what the NRI has accomplished, the research challenges that still remain in the field, and what benefits the country can potentially reap from both past and future breakthroughs in robotics. Giving the perspective of the research community was the Computing Community Consortium chair, Greg Hager of Johns Hopkins University. Representing the federal funding agencies was Lynne Parker, co-chair of the NITRD Interagency Working Group on Robotics and Intelligent Systems. Giving the industry perspective was Jeff Burnstein, president of the Robotic Industries Association. And finally, providing the perspective on the economic impacts and potential gains of robotics research was Robert Atkinson, founder and president of the Information Technology & Innovation Foundation. The Congressional co-chairs of the Robotics Caucus, Representatives Rob Woodall (R-GA) and Mike Doyle (D-PA) also gave some remarks on the importance of continued federal funding of research in this area. It was a standing room only briefing, with the speakers fielding many questions from the audience of Congressional staffers and interested groups. 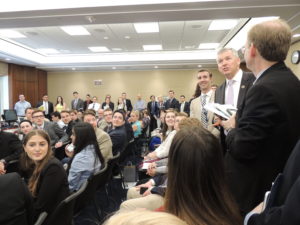 Rep. Rob Woodall (R-GA), Co-Chair of the Congressional Robotics Caucus, delivers some remarks to the audience.

Dr. Hager had some thoughts on the return on investment of federal research dollars, which were pertinent to the discussion at the Capitol Hill event. 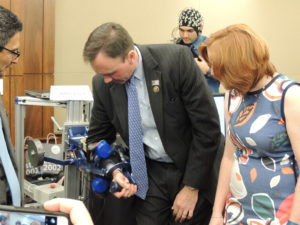 The afternoon of demonstrations were particularly well received. From Ekso Bionics’ exoskeleton; to the Robo Raven of Satyandra Gupta, of the University of Southern California; to the University of Arkansas at Little Rock Cang Ye’s Co-robotic Cane, all the demos gave a picture of the benefits the country has reaped from the NRI, as well as giving an idea of gains still to come. Dozens of attendees kept the open house crowded for the entire day, with multiple members of Congress stopping by to see the exhibits. As well, the exhibition was the subject of a PBS News Hour segment, which showcased some of the researches and their robots.

All around, it was an excellent day for robotics researchers. Hopefully, the Representatives and their staff members walked away with a better idea of the benefits of the federal investment in robotics research.