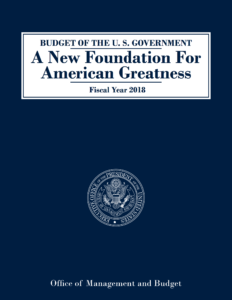 Today President Trump released a more detailed budget request for FY 2018, a follow up to the “skinny” budget released in March, and science agencies fare pretty poorly (as do a lot of other government programs), though U.S. efforts to develop “exascale” computing capabilities were prioritized. Here are some quick details:

I can’t recall a time in my 15+ years of working science policy that science agencies across the board have endured these levels of proposed cuts. You’d have to look back to the early years of the Reagan administration to find similar levels of reductions.

The good news is that it appears many in the leadership in Congress are ready to look past much of this request. While applauding the idea of a budget that “balances,” most of the key players have indicated that much of the rest is problematic and that many of the proposals will have a hard time finding fans in either chamber.

That noted, though the President’s budget is just the first step in the annual appropriations process and Congress will have much to say about it, we are undoubtedly in a more difficult position than if the President’s request had been more favorable to investments in research. If you wanted a blueprint for how the U.S. could cede its global S&T leadership, this budget would be a good start at one. We’ve got our work cut out helping the science community make its case for the importance of these investments.

We’ll have more details as they come available today and in the days to come….