And that’s a good thing, because the President’s planned budget for science was abysmal. We know some of the details about that original plan because the Administration didn’t have time to revamp some of the supporting documentation they’ve traditionally produced to accompany the budget request. An Analytical Perspectives volume is traditionally included with the budget submission and it includes budget breakdowns by theme, including a whole chapter on Research and Development. In that chapter you’ll find descriptions of the President’s priorities for Federal R&D, including “Protecting the Homeland from Physical and Cyber Attacks,” “Harnessing Artificial Intelligence and High Performance Computing,” and “Integrating Autonomous and Unmanned Vehicles into the Transportation Network,” but also several charts that detail what the Administration is requesting for each of the agencies involved in R&D work. Depressingly, most of the charts detail requests with double-digit percentage decreases for Federal science programs. For the National Science Foundation, for example, the only Federal agency whose mission includes support for all the fundamental science and engineering disciplines, here’s what the Administration planned to request for FY 2019:

But the budget agreement changed most of that. With new caps that made room for $132 billion in additional non-defense spending, President Trump and his OMB Director Mick Mulvaney made the decision to add just $75 billion back to the non-defense budget. In his transmittal letter to Congress, Mulvaney acknowledged that though the President agreed to the new budget caps by signing them into law, he didn’t believe that the increases were completely justified for non-defense spending, so his request effectively leaves $57 billion in potential spending on the table.

Fortunately for the computing research community, NSF — which funds about 82 percent of all fundamental computing research in U.S. universities — was one of the agencies that benefitted from this last minute revamp. The President’s request calls for flat funding for the agency overall, but a 2 percent increase for NSF’s research accounts — a marked improvement over the 29 percent decrease originally considered before the budget deal. The last-minute revamp of the NSF budget means we don’t have much detail about how the agency would plan to spend the 2 percent windfall. In fact, here is the entirety of the agency’s budget justification (last year it was 470 pages): 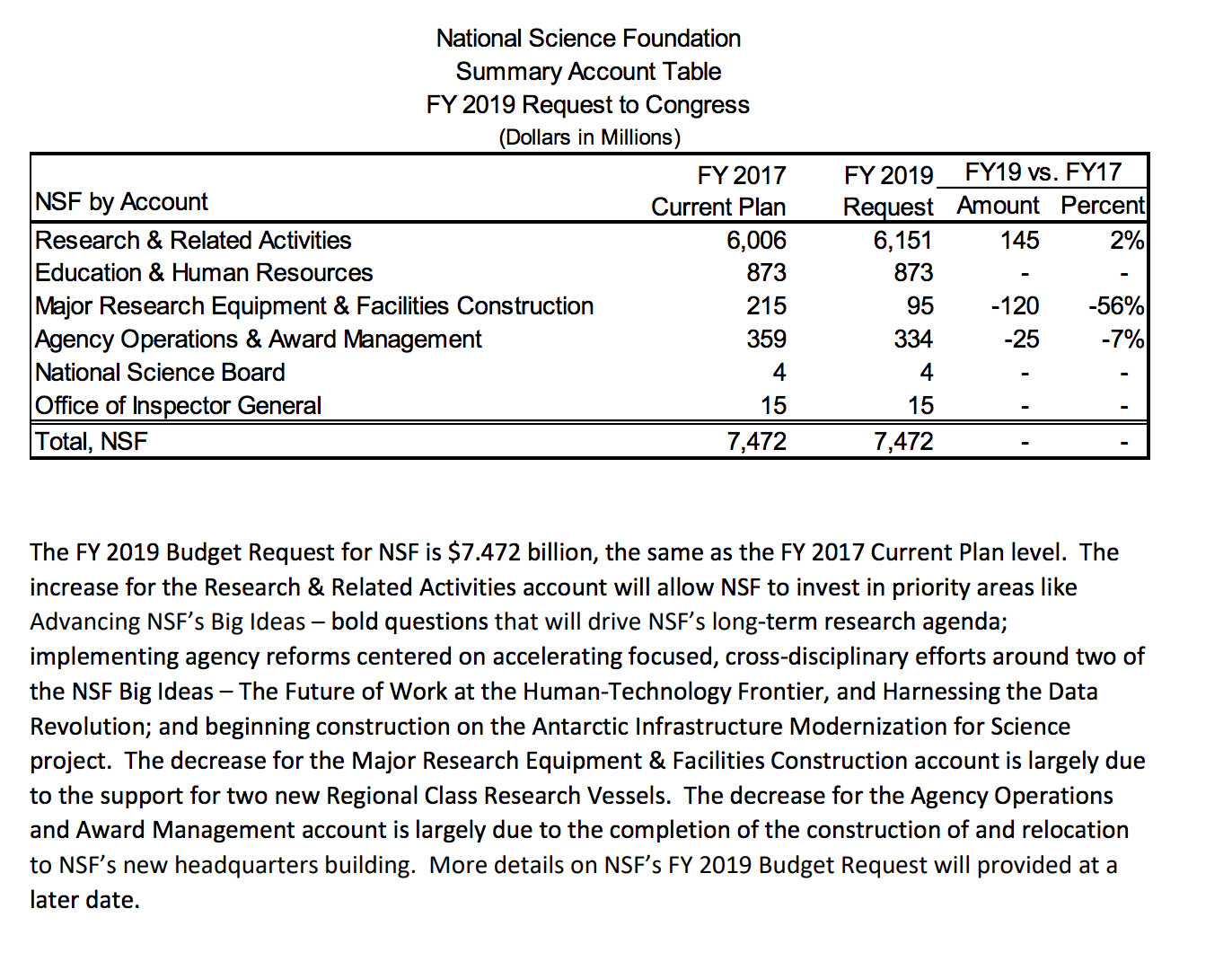 Other “winners” (loosely defined) among research agencies in the President’s budget include:

But other agencies still find themselves subject to deep cuts in the President’s plan, even after the budget cap deal:

Of course, the President’s budget request is just the starting point in a year-long (or longer) process of appropriating funding for Federal agencies. Congress has the key role to play in actually putting numbers to these programs, and they’ve already demonstrated no serious commitment to budget suggestions from this Administration. Odds are also good that they’ll find ways to spend that extra $57 billion in non-defense spending the President didn’t see fit to include in his request.

There are also many other details about this budget we’re still waiting to learn — how NSF plans to prioritize its research, what shifts in cyber security research funding at the Department of Homeland Security mean for the character of the work supported, how the Department of Energy expects to ramp up exascale funding…to name just a few.  And, of course, we still don’t know how congressional appropriators plan to put that extra spending towards the unfinished FY 2018 appropriations, something they need to decide before March 23rd, when the current continuing resolution funding government expires.

So while this is an important first step in science funding for FY19, it’s just the start of a long process. It would have been better to find more support from the President for the investments that help fuel the innovation that drives the nation’s economy and our competitiveness, but this is just the first word in the conversation and not the last. We’ll continue to weigh in with policymakers about the importance of the Federal investment in research. And we’ll track it all and report what we learn here, so stay tuned!

Budget Deal for FY18 and FY19 In Sight; Waiting for it to Cross the Finish ... Department of Energy FY 2019 Request: Good for Computing but with Some Aste...
Scroll to top