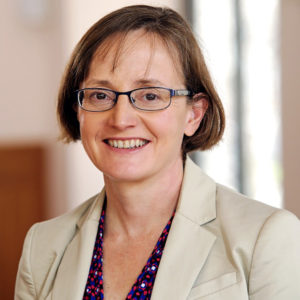 Margaret Martonosi is the Hugh Trumbull Adams ’35 Professor of Computer Science at Princeton University, where she has been a faculty member since 1994. In addition to her primary position at Princeton, she is an Andrew Dickson White Visiting Professor-At-Large at Cornell University. From 2015 to 2017, she did international technology policy as a Jefferson Science Fellow within the U. S. Department of State.

Martonosi is a fellow of both IEEE and ACM. Her major awards include Princeton University’s 2010 Graduate Mentoring Award, the Anita Borg Institute’s 2013 Technical Leadership Award, and test-of-time paper awards from ISCA and ACM SIGMOBILE. Martonosi co-chairs the NSF CISE Advisory Committee, has served on the board of directors of the Computing Research Association (CRA) from 2009 to 2017, and will be co-chairing CRA-Women beginning in October, 2017.