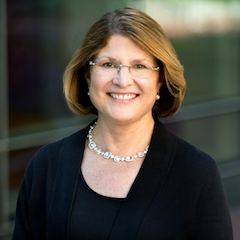 Andrea Danyluk is the Mary A and William Wirt Warren Professor of Computer Science at Williams College.  She received her A.B. from Vassar College in 1984 and her Ph.D. from Columbia University in 1992, and was a researcher at NYNEX (now Verizon) before joining the faculty at Williams in 1994.   Danyluk’s research interests are focused on applications of machine learning.  She has published book contributions, journal and conference articles in this area, and has co-edited a special issue of the Journal of Machine Learning Research.  She has served on numerous conference program committees, including the National Conference on Artificial Intelligence (AAAI) and the International Conference on Machine Learning (ICML) and has served as Tutorials co-Chair for AAAI (twice), Associate Chair for AAAI, Program co-Chair of ICML 2001, and General Chair of ICML 2009. Danyluk is active in CS education.  She is a co-author of Java: An Eventful Approach, with Kim Bruce and Tom Murtagh, and was a member of the ACM / IEEE Task Force on CS Curricula 2013.  She is a member of the ACM Education Board, the ACM Education Advisory Committee, and is co-chair of the ACM Data Science Task Force.  She joined the Computing Research Association’s Committee on the Status of Women in Computing Research (CRA-W) in 2008. She is the co-chair of CRA-WP.