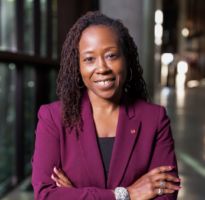 Dr. Ayanna Howard is the Dean of Engineering at The Ohio State University and Monte Ahuja Endowed Dean’s Chair. Previously she was the Linda J. and Mark C. Smith Endowed Chair in Bioengineering and Chair of the School of Interactive Computing at the Georgia Institute of Technology. Dr. Howard’s research encompasses advancements in artificial intelligence (AI), assistive technologies, and robotics, and has resulted in over 275 peer-reviewed publications. She currently works on projects ranging from healthcare robots to developing methods to mitigate bias and trust in AI. She is a Fellow of IEEE, AAAI, AAAS, and the National Academy of Inventors (NAI). She was also recently elected to the American Academy of Arts and Sciences. To date, Dr. Howard’s unique accomplishments have been highlighted through a number of other public recognitions, including being recognized as one of the 23 most powerful women engineers in the world by Business Insider and one of the Top 50 U.S. Women in Tech by Forbes. In 2013, she also founded Zyrobotics, which developed STEM educational products to engage children of diverse abilities. Prior to Georgia Tech, Dr. Howard was at NASA’s Jet Propulsion Laboratory where she held the title of Senior Robotics Researcher and Deputy Manager in the Office of the Chief Scientist. She also served on the National Academies’ Committee on Responsible Computing Research: Ethics and Governance of Computing Research and its Applications and currently serves on the National Artificial Intelligence Advisory Committee (NAIAC) and on the standing committee of the One Hundred Year Study on Artificial Intelligence (AI100).