Originally Printed in the Winter/Spring 2009 Newsletter 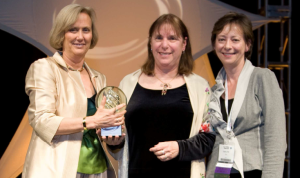 The Anita Borg Technical Leadership Award is given to a woman who has inspired the women’s technology community through outstanding technological and social contributions. This year’s winner, AT&T Fellow Elaine Weyuker, has had a career of firsts: She was the first woman to receive a doctorate in computer science from Rutgers University; the first female faculty member at the Courant Institute of Mathematical Sciences at NYU; and is the only female AT&T Fellow. A leader in the software-engineering research community, Weyuker specializes in software testing, reliability assessment, metrics and measurement, and empirical studies; and is a fellow of both ACM and IEEE. The Anita Borg Technical Leadership Award is underwritten by Cisco.

In her acceptance speech for the award, Weyuker said that she was especially thrilled to win this award, be-cause it was presented at the Grace Hopper Conference and was named for Anita Borg. Elaine Weyuker identified herself as the “missing link” between the two because she was a student of Professor Hopper’s at the University of Pennsylvania, and a professor of Anita’s at NYU.  But mostly, it was because “Anita was my friend. She was one of the very first people I met when I arrived at NYU as a brand new PhD and faculty member. We were the same age and shared many interests. Both of us loved hiking, kayaking and especially swimming and we began to go swimming regularly at university’s pool.  When it closed for renovation, we started going to a nearby NYC public pool. We would go regularly when we needed a break, usually early afternoon when it was almost empty. We would go, swim a couple of miles of laps and walk back ready to tackle anything. One day we went later than usual. The women’s locker room was empty as usual, but when we got to the pool, it was packed with pre-teen and teen aged boys, all being… boys. We thought we could just swim laps along the edge and avoid them, but shortly after starting, a boy yelled “Hey, look at those ladies. Let’s get them.” All of a sudden a large pack of boys descended on us splashing furiously. Anita and I looked at each other and simultaneously grabbed onto the wall, and started kicking our feet and splashing just as furiously. The leader was shocked. We were fighting back and he hadn’t expected that. He screamed out: “let’s leave them alone” and they moved away so we could continue our laps.

There is a moral here—one that both Anita and I understood and one that is a very valuable. Do not let the bullies get you. Throughout your career there will be people who try to tell you that your work is no good and who try to tear you down to build themselves up. This is not the same as constructive criticism which can be very helpful. Learn the difference and most importantly have the courage of your convictions. Anita did, and I always try to also.”