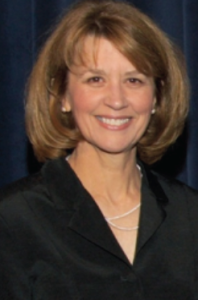 Mary Jean Harrold is the ADVANCE Professor of Computing in the College of Computing at Georgia Tech.  She performs research in analysis and testing of large evolving software, in fault localization and failure identification using statistical analysis, machine learning, and visualization, and in monitoring deployed software to improve quality. She has received funding for her research from government agencies, such as NSF and NASA, and industries, such as Boeing Commercial Airplanes, Tata Consultancy Services, IBM, and Microsoft.  Mary Jean served on the editorial boards of ACM Transactions on Programming Languages and Systems, ACM Transactions on Software Engineering and Methodology, and Journal of Software Testing, Verification, and Reliability, served as program chair for the ACM SIGSOFT International Symposium on Software Testing and Analysis 2000, program co-chair of the ACM/IEEE International Conference on Software Engineering 2001, and general chair for ACM SIGSOFT Foundations of Software Engineering 2008.  She also serves as a member of the Board of Directors for the Computing Research Association (CRA).  She actively works to increase the participation of women in computing. She is a member, and past co-chair, of CRA-W and a member of the Leadership Team of the National Center for Women and Information Technology (NCWIT). She received an  NSF NYI Award and was selected as ACM Fellow and IEEE Fellow. She received the Ph.D. in computer science from the University of Pittsburgh.

Q: You followed a relatively non-traditional route to your professorial career.  Tell us about your former career and what motivated your career change.

I always liked math and science in high school, so pursuing a career in math was the natural choice for me.  At that time, there were few computer science programs in the US. However, there was a computer class at my university.  I took that class, but didn’t enjoy it—no one, including the instructor, knew much about the subject, and we spent most of our time standing around the computer waiting for output. During the next 10 years, many people encouraged me to consider com-puter science but I just wasn’t interested. Instead, I taught secondary (7-12) and college math during that time. My position at one of the schools required me to work with computers, and at that point, I did become interested. I started teaching myself Fortran, and when we moved to Pittsburgh, I started taking classes at the University of Pittsburgh. At first, I wanted to take a few classes and get a job in computing, but I got interested in research, and decided to go to graduate school. At the University of Pittsburgh, I was fortunate to have Mary Lou Soffa as my advisor. She was (and still is) an excellent advisor and role model, and she helped me prepare for a career as a faculty member. I received my Ph.D. from the University of Pittsburgh in 1988. Although I changed areas from math to computer science, I have remained in education. The Ph.D. taught me how to do research. I now get to teach classes I enjoy, do exciting research in areas that interest me, collaborate with outstanding researchers, and advise and work with excellent graduate students.  I can’t imagine a better career!

Q: Please describe your current research area.  How has your research evolved over the years?

My current research is in software quality, as it was when I worked on my PhD.  For my dissertation, I worked in regression testing (retesting software after it has been changed), and developed techniques to analyze the program to determine which test cases in the test suite used for the original program should be reused to test the changed program.  In later work, I built on my dissertation work, and, with my students and colleagues, I developed a body of research that provides efficient and effective techniques for retesting the program after changes.  In addition to developing the new techniques, we have applied them to different languages and in different environments. Although I’ve continued to work in software quality, along with my students and colleagues, I have expanded research in several areas—I’ll give a few examples.  I have developed techniques to help the developer find faults in programs using statistical analysis, machine learning, and visualization to assist in this process    I have applied these techniques in different settings, such as critical software, different environments, and interaction with external systems.  I am developing techniques that will provide efficient and automatic fault analysis of systems, particularly critical systems, to provide analysis of complex data-communication networks for redundancy.   I am exploring the application of my techniques to new areas, including testing and maintenance of medical databases of patient information, testing and debugging for third-party software, and testing and debugging of cloud software.

Q: What do you see as the future technical challenges in your field?

There are many technical challenges in the area of software quality. I’ll give some examples. First, the pervasiveness of computing systems in our lives increases the demand for high-quality software systems and requires new techniques for designing, testing, and maintaining these systems. Second, new types of systems and environments, such as cloud computing, are constantly being developed, and they will require techniques to assess and improve the quality of these systems. Third, new applications and ways to use computing are constantly being created, and quality techniques that are appropriate for these new applications will be needed. Fourth, achieving high-quality is expensive so more emphasis on techniques that can automate or partially automate the tasks will need to be developed.  Finally, software will increasingly be developed and tested by distributed and global teams, and new models for working in these ways will be needed.

Q: What do you enjoy most about your career right now? What drives you at this point in your career?

I most enjoy the exciting research I am able to do, and working with students and seeing them grow and mature in research.  My research area continues to grow because of the need for producing high-quality software in an efficient way, and there are new opportunities for research.  No matter what kind of software is being developed, there is a need for techniques to improve the testing, debugging, and maintenance of these systems.  That lets my students and me explore many different kinds of systems and environments and work to improve them.

Q: What has been your involvement with CRA-W?  What has it meant to you?

I joined CRA-W in 1998 and had as my first project the CRA-W Distributed Mentor Project (DMP now DREU); this project is now run in collaboration with the Coalition to Diversify Computing (CDC) and is called Distributed Research Experiences for Undergraduates (DREU). Through that project, I have had the opportunity to meet (either through email or in person) many female students. I’ve enjoyed hearing about their experiences in the DMP project, and am happy to see so many of them continue on to graduate school, complete a Ph.D., and become faculty members or researchers.  As recently as the Grace Hopper Conference that was held in October 2010 in Atlanta, GA, I met one of the DMP students with whom I had interacted while I was the DMP Director.  She is now a researcher at Microsoft. After directing the DMP for four years, Carla Ellis and I took over as co-chairs of CRA-W.  During our three-year term, many new programs were started, such as the Grad Cohort and the CAPP (now CMW) programs.  One thrill for me was CRA-W being given two national awards.  The first was the Presidential Award for Excellence in Science, Math, and Engineering Mentoring (PAESMEM) in 2003.  The award ceremony, which was held at the White House, coincided with the annual CRA-W Board meeting so I accepted the award with Jan Cuny and Carla ran the first day of the meeting.  The second was the National Science Board’s Public Service Award in 2005.  This time, both Carla and I accepted the award at a ceremony in which many of the CRA-W Board members also attended.

After stepping down as co-chair of CRA-W, I worked with Anne Condon on Communications for CRA-W.   We worked on two main projects.  The first was a review of the CRA-W web site that served as a starting point for redesign of the web site.  The second was the CRA-W Newsletter.  What started as a way to distribute information about CRA-W for securing funding is now a semiannual Newsletter.  Anne and I co-edited the Newsletter for several years, and then I co-edited it with Carla Ellis, who is still the co-editor of the Newsletter today. I have also spoken at career mentoring workshops at various levels ranging from the Grad Cohort to the Cohort for Associate Professors.

Q:  What other activities have you been engaged in that support women in computing?

In 2003, I, along with a number of others who had worked on programs to increase the participation of women in computing, participated in a workshop to explore the formation of a national center.  Out of that workshop came a plan to organize a center—which eventually became The National Center for Women and Information Technology (NCWIT).  I was part of the team that planned the organization of NCWIT, and Georgia Tech was one of the original seven Hubs for the center.  I served as director of the Georgia Tech Hub, and on the leadership team for the Center.  NCWIT has grown significantly, has had a big impact, and now involves many academic and industrial institutions.  Georgia Tech is now part of the NCWIT Pacesetters Program.

Q: What challenges have you had to overcome as a woman leader in your field?

Early on, the challenges came from my family and teachers, who encouraged me to go to college but advised me to pursue a field that would a be good one for a “wife and mother,” such as being a teacher.  I knew I wanted to pursue a math degree so I became a math teacher.   There was also little support for my going to graduate school.  However, I did get an MS in math. When I decided to pursue a Ph.D. in computer science, my husband was very supportive – I wouldn’t have been able to complete it without his support.  After completing my Ph.D., I’ve faced issues such as differences in salary between my salary and the salaries of male faculty at the same level.  In some cases, the administrators have worked to remedy the inequity but in other cases, they haven’t seen it as a problem.

Q: How do you balance work and family?

Balancing work and family has been different for me than for many other women at the same stage because I started my computer science career as a second career.  While I was in graduate school, I already had a family—my husband and I had two teenage sons.  Thus, there were many family activities in which we participated and many demands.  As I mentioned above, my husband was very supportive of my studies. By the time I completed my Ph.D. in 1988, one of my sons was already in college and when I started my first faculty position in 1990, my second son was also in college.   So, as a junior faculty member, I did not have a young family. Now, I have two grandsons. I make them a priority, and my husband and I visit them regularly.