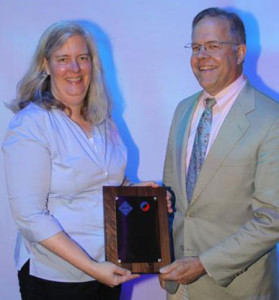 The ACM SIGGRAPH Awards program recognizes indi-viduals who have made significant contributions to the computer graphics community through their research, teaching, service, or writing. The Computer Graphics Achievement Award is awarded annually to recognize long-lasting accomplishments that have provided a significant advance in the state of the art of computer graphics and interactive techniques.

This year, the award was presented to Jessica Hodgins who is a Professor in the Robotics Institute and Computer Science Department at Carnegie Mellon University and part-time Director of Disney Research, Pittsburgh.  She is being honored for her work in physically-based animation, particularly the simulation and animation of people and other creatures.

The award was formally presented at the SIGGRAPH 2010 conference in July and included an opportunity for Jessica to talk about her work.

Jessica served as a CRA-W board member from 2003-2008, co-chairing the DREU program.  She has also served as a DREU mentor for over 20 students and as a Distinguished Lecturer in the CRA-W DLS program.