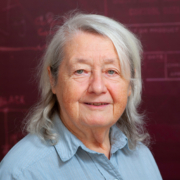 Maria Gini is a College of Science & Engineering Distinguished Professor in the Department of Computer Science and Engineering at the University of Minnesota.  She works on decision-making for autonomous agents in domains ranging from swarm robotics to distributed methods for task allocation, methods to explore an unknown environment, teamwork for search and rescue, and navigation in dense crowds.

She is a Fellow of AAAI,  ACM, and IEEE. She has won numerous awards, including the CRA A. Nico Haberman Award for increasing participation of women and underrepresented minority members in computing research, the NCWIT Harrold and Notkin Award for Research and Graduate Mentoring, and the AAAI Distinguished Service Award. She is Editor in Chief of Robotics and Autonomous Systems and is on the editorial board of numerous journals, including Autonomous Agents and Multi-Agent Systems, Current Robotics Reports, and Integrated Computer-Aided Engineering.