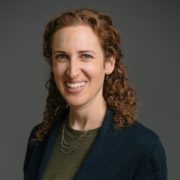 Meredith Ringel Morris is a Principal Scientist with Google Brain, conducting research on human-computer interaction and human-centered AI. Previously, she was the Director of People + AI Research for Google’s Responsible AI organization. Prior to joining Google Research, she was the Research Area Manager for Interaction, Accessibility, and Mixed Reality at Microsoft Research, where she also founded the Ability research group. Dr. Morris is also an Affiliate Professor in the Paul G. Allen School of Computer Science & Engineering and in The Information School at the University of Washington. She is an ACM Fellow and a member of the ACM SIGCHI Academy. Dr. Morris earned her Ph.D. in computer science at Stanford University and her Sc.B. in computer science at Brown University.