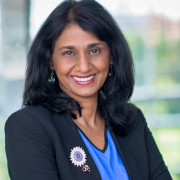 Padma Raghavan is the Vice Provost of Research at Vanderbilt University. Recently, Padma left Pennsylvania State University, where she was the Associate Vice President for Research and the Director of Strategic Initiatives at the Pennsylvania State University, and also a Distinguished Professor of Computer Science and Engineering. Raghavan was the founding Director of the Penn State Institute for CyberScience, the coordinating unit on campus for developing interdisciplinary computation and data-enabled science and engineering. Raghavan received her Ph.D. in computer science from Penn State. Prior to joining Penn State in August 2000, she served as an associate professor in the Department of Computer Science at the University of Tennessee.

Raghavan specializes in high-performance computing and computational science and engineering. In her professorial role, Raghavan is deeply involved in education and research, with 46 Masters and Ph.D. theses supervised and approximately 100 peer-reviewed publications in three areas: scalable parallel computing; energy-aware supercomputing; computational modeling and knowledge extraction. She has earned several awards including an NSF CAREER Award (1995), the Maria Goeppert-Mayer Distinguished Scholar Award (2002, University of Chicago and the Argonne National Laboratory), and selection as an IEEE Fellow (2013).

Raghavan serves on several editorial boards including those at SIAM (Society of Industrial and Applied Mathematics) and IEEE (Institute of Electrical and Electronics Engineers): SIAM Series on Computational Science and Engineering; SIAM Series on Software Environments and Tools; Journal of Parallel and Distributed Computing; and the IEEE Transactions on Parallel and Distributed Systems. Recently Raghavan co-chaired Technical Papers at Supercomputing 2012, and the 2011 SIAM Conference on Computational Science and Engineering. She also serves on various advisory and review panels: the National Research Council’s Committee on Future Directions for NSF Advanced Computing Infrastructure; the National Academies Panel on Information Science at the Army Research Laboratory; the review committee for the Computation Directorate at the Lawrence Livermore National Laboratory; and the Board of Trustees of the Great Lakes Consortium for Petascale Computing. Padma was a board member of the Committee on the Status of Women in Computing Research, and served as a program chair for the Distinguished Lecture Series program.