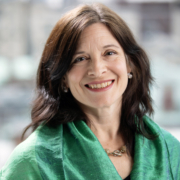 Dr. Rebecca Wright is the Druckenmiller Professor of Computer Science and director of the Vagelos Computational Science Center at Barnard. Prior to joining Barnard, she was a professor in the Computer Science Department and Director of DIMACS at Rutgers, a professor in the Computer Science Department at Stevens Institute of Technology in Hoboken, New Jersey, and a researcher in the Secure Systems Research Department at AT&T Labs and AT&T Bell Labs. Her research is primarily in the area of information security, including cryptography, privacy, foundations of computer security, and fault-tolerant distributed computing. Recent work includes accountability, differential privacy, privacy-preserving data mining, and secure multiparty approximations. Her ongoing research goals are the design of protocols, systems, and services that perform their specified computational or communication functions even if some of the participants or underlying components behave maliciously, and that balance individual needs such as privacy with collective needs such as network survivability and public safety.

Dr. Wright serves as an editor of the International Journal of Information and Computer Security and the Transactions on Data Privacy. She is a member of the board of the Computer Research Association’s Committee on the Status of Women in Computing Research (CRA-W). She was a member of the board of directors of the International Association for Cryptologic Research from 2001 to 2005 and the steering committee of the Information Security Conference from 2006 to 2010, and an editor of the Journal of Computer Security from 2001 to 2011. She was Program Chair of Financial Cryptography 2003 and the 2006 ACM Conference on Computer and Communications Security (CCS) and General Chair of Crypto 2002. She has served on numerous program committees, including Crypto, the ACM SIGKDD International Conference on Knowledge Discovery and Data Mining, and the Usenix Security Symposium. She received a Ph.D. in Computer Science from Yale University in 1994 and a B.A. from Columbia University in 1988. She received an honorary M.E. from Stevens Institute of Technology in 2006. She is a Fellow of the IEEE and a Distinguished Member of the ACM.