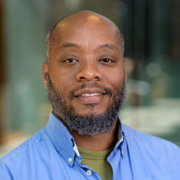 Russ Joseph is an associate professor of electrical and computer engineering and computer science at Northwestern University (Evanston, IL). His primary research interest is in computer architecture, focusing on the design and implementation of power-aware and reliability-aware computer systems. Some of his recent projects have examined microprocessor design for reliability and variability tolerance, co-designed circuit/compiler technologies to support timing level speculation, and on-line power management for multi-core systems. Prior to joining the Northwestern faculty, Dr. Joseph completed his PhD in Electrical Engineering at Princeton University and earned his BS in Electrical and Computer Engineering with an additional major in Computer Science from Carnegie Mellon University. He is the recipient of an NSF CAREER Award.