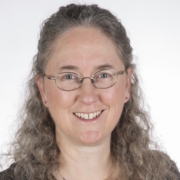 Susan Rodger is a Professor of the Practice in the Department of Computer Science at Duke University. She received her MS and Ph.D. in Computer
Science from Purdue University and her BS in Computer Science and Mathematics from North Carolina State University. Her research is in visualization, algorithm animation, and computer science education. Rodger developed JFLAP, software for experimenting with formal languages and automata that is used in automata theory courses worldwide. She leads the Adventures in Alice Programming project to integrate computing into K-12. With others, she has created several online introductory programming Coursera courses. Rodger was chair of SIGCSE, chair of the AP Computer Science Development Committee, a member of the ACM Education Policy Committee, and has been a board member of CRA-WP since 2010. Rodger received the IEEE Computer Society 2019 Taylor L. Booth Education Award, ACM 2013 Karl V. Karlstrom Outstanding Educator Award, Duke University Trinity College 2019 David and Janet Vaughn Brooks Distinguished Teaching Award, and she was one of two finalist candidates for the NEEDS Premier
Award for Excellence in Engineering Education Courseware for the software JFLAP.