E. The Challenges of the Enrollment Surge for the Unit

The data collected from the CRA Enrollment Survey shows that the impact on computer science units[1] from increasing enrollments is significant[2] (Figure E.1). For example, 66% of the 134 responding doctoral-granting units reported that the enrollment growth is having a big impact (i.e., causing significant challenges) on their unit, while almost 60% of the 93 responding non-doctoral granting units reported that the enrollment growth is beginning to have an impact or already is having a significant impact. 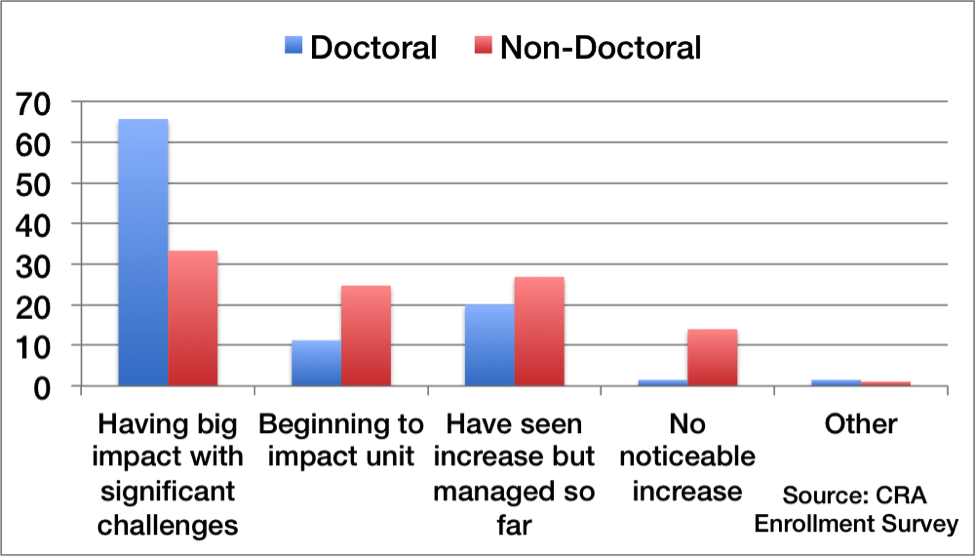 Figure E.1: Percentage of doctoral- and non-doctoral granting units experiencing a given level of impact.

The CRA Enrollment Survey requested units to report problems and concerns related to increasing enrollments. Figures E.2(a) and E.2(b) provide the responses from doctoral- and non-doctoral-granting units, respectively. Classroom space shortages, insufficient numbers of faculty/instructors, and increased faculty workloads were among the top concerns at both doctoral- and non-doctoral granting units. Insufficient numbers of TAs was also a top concern at doctoral-granting units. 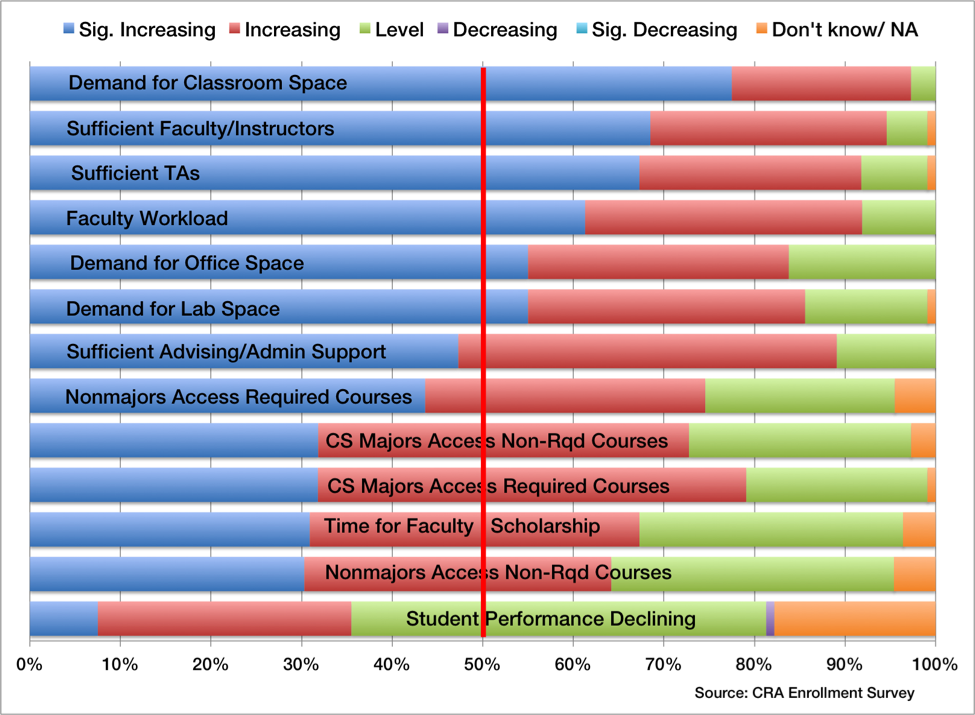 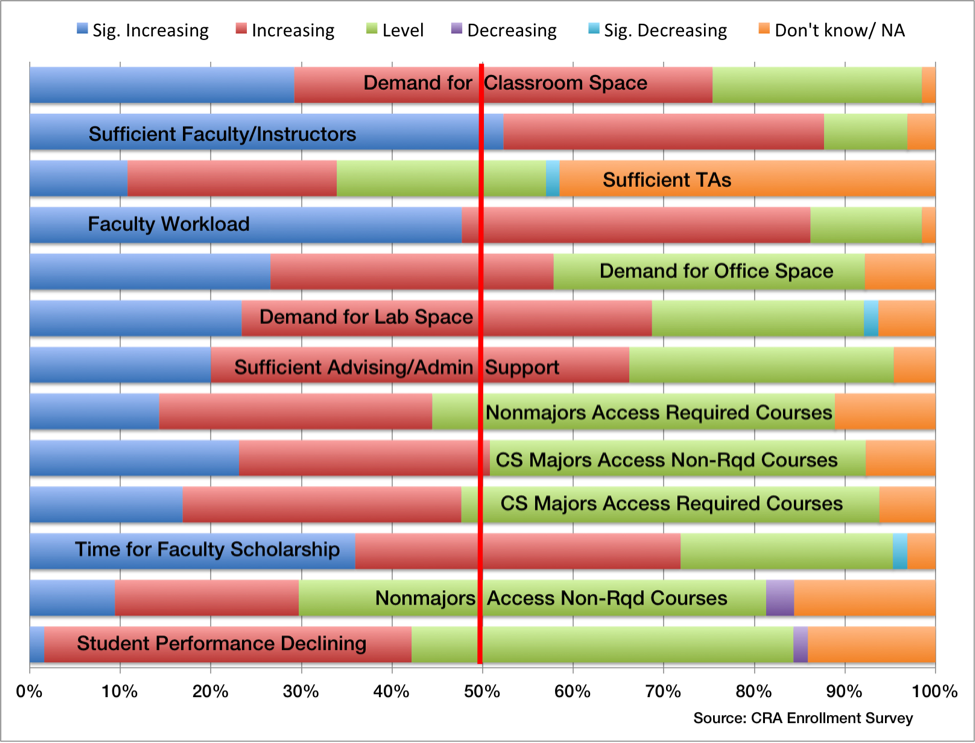 Figure E.2: Percentage of units stating whether a given problem or concern exists at their unit due to increasing enrollment.

In regard to other student impacts, the majority of institutions reported that student retention was level or increasing overall. Similarly, most doctoral- and non-doctoral granting units reported that the ratio of women and other underrepresented groups entering the CS degree program was level or increasing. Diversity is discussed in more detail in [D. Impact on Diversity]. 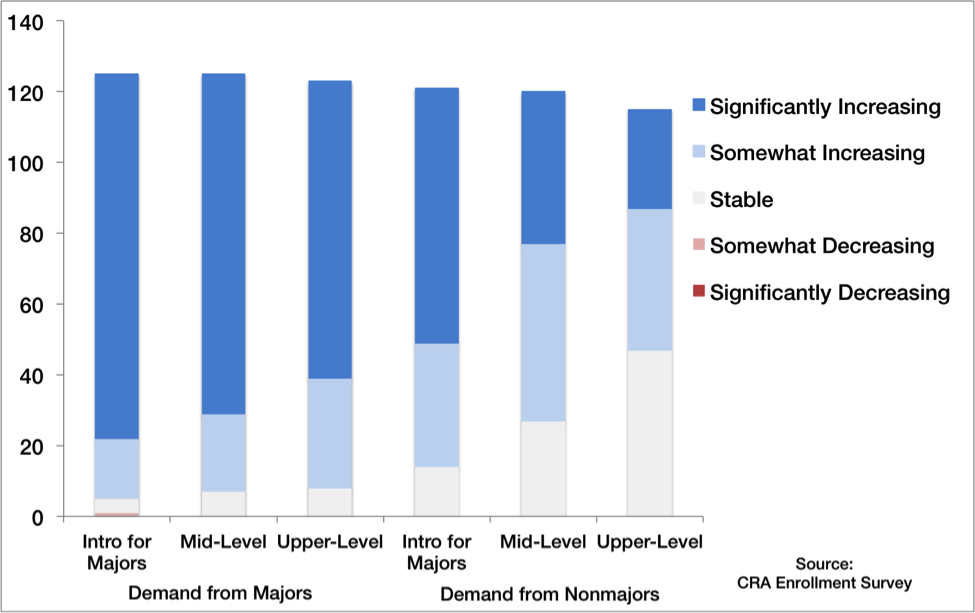 Classroom space shortages, insufficient numbers of faculty and instructors to teach courses, and increased faculty workloads are among the top problems and concerns at doctoral-granting and non-doctoral granting units. On the positive side, the CRA Enrollment Survey found that approximately 88% of both doctoral- and non-doctoral granting respondents believe that student retention is level or increasing overall. Also, approximately 40% of respondents believe student performance has not been adversely affected so far. On the other hand, more than one-third of the units reported concerns that student performance is declining. Many units stated that students are facing increased challenges to enroll in required and non-required CS classes. Units also report that it is increasingly difficult to advise all of their students and provide the needed administrative support.

Many units are clearly struggling to cope with their current enrollments in computer science courses. Larger faculty workloads resulting from increased enrollments may decrease faculty retention, which will exacerbate the problems that units have in covering their courses. Current pressures on computer science units are extremely difficult to manage and will also intensify if enrollments continue to grow. Institutional administrators need to work with computer science units to find sustainable approaches to meet the student demand, accounting for important factors such as (1) lack of space for classes and units, (2) academic support required, (3) the limited pool of qualified teaching faculty, (4) the goals and needs of nonmajors taking CS classes, (5) the effect of class size on the course experience, and (6) the desired retention of both students and faculty.

[2] The use of the term “significant” in this section does not refer to statistical significance. Instead it reflects the qualitative perception of the units who responded to survey questions asking about “significant” demands and challenges.

[3] IPEDS doctoral-granting units are institutions that grant at least 20 research/scholarship doctorates in any field (not including professional practice doctoral-level degrees such as JD and MD), following the Carnegie Classification of Institutions of Higher Education. Taulbee and NDC survey data define doctoral- and non-doctoral granting units by whether the unit grants doctorates in computing.