Tech Daily’s William New and Sarah Lai Stirland have a piece today (sub. req’d) on the White House’s 2003 Presidential Early Career Awards for Scientists and Engineers in which Deputy Defense Secretary Paul Wolfowitz praised the role of science and technology in America’s victory in the Cold War.

At the ceremony, Wolfowitz said he considered pursuing a doctorate in chemistry at MIT but opted instead for political science. Still, he lauded the role of science and technology in modern society. He attributed America’s ultimate dominance in the Cold War to the nation’s technological and scientific superiority.
“I think it could be argued correctly that it was science and technology that eventually forced the Soviet Union to face up to the failure of its own system,” he said. Pointing to technology’s role in the current war against terrorism, Wolfowitz said that it “allowed us to win two brilliant military victories, first in Afghanistan and then in Iraq.”

While it’s great that the leadership of the Pentagon recognizes the important contribution S&T makes to DOD’s mission, it’s equally important that they recognize that the technologies they’re relying upon now are the result of investments made in basic research 15, 20, even 30 years ago (or more). And it’s crucial that they recognize that DOD is moving away from those sorts of long-term investments, emphasizing instead nearer-term development projects. You can see this trend by looking at this chart showing the actual dollars of defense spending for basic research, applied research, and advanced technology development (“6.1,” “6.2”, and “6.3” research in Defense parlance, respectively). 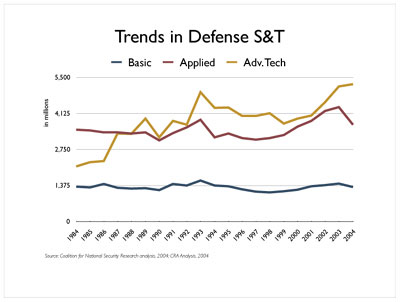 Enlarge
What the chart shows is that while advanced technology development (the “D” in “R&D”) funding has more than doubled over the 20 year period from 1984-2004, basic research (the “R” in “R&D”) has remained essentially flat.
This funding profile isn’t sustainable if we hope to continue to fuel the innovation that drives the technology that in turn gives us the advantages we enjoy over our adversaries today.
(For a bit more background on problems with DOD’s approach to basic research, and particularly IT-related research, check this post detailing DARPA’s role in cybersecurity research. CRA also spelled out these problems in a bit more detail in our testimony (pdf) before PITAC’s cybersecurity subcommittee in July.)