CompTIA, the Computing Technology Industry Association, recently put a series of technology policy questions to both Sen. John Kerry and President George W. Bush, who apparently, to their credit, actually answered the questions.
I don’t want to descend too far into the mire of dissecting the answers, but I wanted to highlight two that are particularly relevant to CRA’s interests. The first is What should the federal government do to address the issue of cyber security?:

Bush response:
Given the enormous importance of e-commerce, Internet-based communications, and the use of cyberspace to control portions of our physical infrastructure, cyber security is critical. The investments being made today in securing out Nation’s cyber infrastructure and in cyber security R&D are working to ensure that future generations of network software and hardware are less vulnerable to an attack and can maintain critical operations even when compromised.
I announced the National Strategy to Secure Cyberspace in February 2003. This plan, which complements the National Strategy for the Physical Protection of Critical Infrastructure and Key Assets, depends on both public and private efforts to secure the many elements that comprise the national information infrastructure, including routers, switches, fiber-optic cables, and tens of millions of interconnected computers. The strategy provides five national cyber security priorities: a national security response system; vulnerability reduction program; an awareness and training program; a government cyberspace security program; and national security and international cyberspace security cooperation.
Kerry response:
In particular, worms and viruses are causing economic losses of billions of dollars a year. Experts have argued that future worms could allow attackers to rapidly control millions of Internet-connected computers. They could then use those computers to launch “denial of service attacks,” or steal and corrupt large quantities of sensitive information. Moreover, these worms could reach most vulnerable targets in an hour or less. We need a president who is actively supportive of developing technologies that will automatically detect and respond to these kinds of attacks.
We need a president who will devote the energy of the White House to making our networks – our 21st century infrastructure – stronger and more secure. That means supporting a cyber security intelligence system ready to detect these threats. I will implement global standards and best practices so that weak links are strengthened. And we need a real partnership between the public and private sectors. Most of the infrastructure we need to protect doesn’t belong to government – and neither government nor business can fix these problems alone.

The second is: How can the federal government better encourage investment in both basic and applied research and development?

Bush response:
America’s economy leads the world because our system of private enterprise rewards innovation. Entrepreneurs, scientists, and skilled workers create and apply the technologies that are changing our world. I believe that government must work to help create a new generation of American innovation and an atmosphere where innovation thrives. That is why it is crucial that we make the R&D tax credit permanent to spur private sector innovation.
Science has always been an important priority in my Administration. My 2005 budget provides a record $132 billion for Federal R&D funding – a 44% increase over 2001 levels. I have committed 13.5% of total discretionary spending to R&D, which is a level of investment not seen since the height of the Apollo Space program in 1968. Basic research is supported with $26.8 billion – a 26% increase from 2001.
I completed the doubling of the budget for the National Institute of Health (NIH) and increased the National Science Foundation’s (NSF) budget by 30%. Since 2001, funding for nanotechnology R&D doubled to $1 billion and funding for information technology R&D is up to $2 billion. My Hydrogen Fuel Initiative provides $228 million for hydrogen energy research in 2005 alone – more than triple what it was in 2001. And contrary to the myth propagated by my opponent, I am the first president to provide Federal funding for human embryonic stem cell research. Since 2001, my Administration has provided $35.5 million for stem cell research, and in 2003, the NIH funded $190 million in adult stem cell research.
Kerry response:
Federal support for long-term research that is beyond the time horizons of individual companies has played a critical role in creating high-tech products, services, and industries. This is particularly true for basic research at our nation’s universities, where we have the dual benefit of research and advanced training of our future scientists and engineers. The contribution of government-funded university research, however, is often critical for igniting the process of innovation. I want America to be the world leader in innovation and discovery and is committed to increasing the federal government’s investment in research and innovation.
Among other things, I will boost support for the physical sciences and engineering by increasing research investments in agencies such as the National Science Foundation, the National Institutes of Health, the Department of Energy, the National Institute of Standards and Technology, and the National Aeronautics and Space Administration. This funding will help with the broad areas of science and technology that will provide the foundations for economic growth and prosperity in the 21st century, including advancements in nanotechnology, advanced manufacturing, IT, life sciences, clean energy and industrial biotechnology.

I’ll give both candidates credit for voicing support for increased funding at NSF (in the latter answer) and cyber security R&D (in the former). If I’m going to quibble, I’d question the intensity of support for cyber security R&D noted by the President in the first answer by citing the total amount the Department of Homeland Security’s Science and Technology directorate will spend on cyber security R&D in FY 2004 ($18 million out of a total S&T budget of about $1 billion) as well as concerns we’ve raised in the past about the current state of cyber R&D. But it’s easier to quibble with the President because he’s the only one who has actually had to implement his priorities. Sen. Kerry’s answers are cast in the right direction, I think, but lack enough specificity to really know how they’d fare through the budget process.
When it comes down to it, funding for science — especially fundamental research — tends to be a fairly bipartisan endeavor. Just to illustrate, I whipped up this little graph that shows how IT research and development funding has fared through the various administrations (click to make it big enough to see): 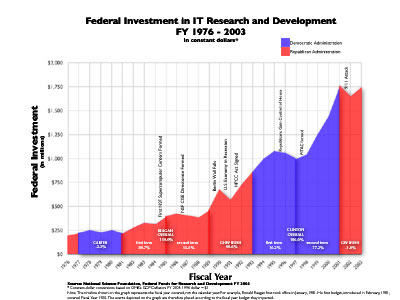 I put together the chart from NSF data and using the OMB FY 2004 deflators to get constant dollars. The years indicated are fiscal years, not calendar years, and the administrations are placed on the timeline so they cover the budgets for which they were responsible. For example, Reagan entered office in January, 1981, but his first budget (released in Feb 1981) was for the 1982 fiscal year. Also, the events placed on the chart are just ones that occurred to me as I was plotting this out as possibly relevant to the info on the chart, but are by no means exhaustive. I’d be really interested to hear feedback (harsha [at] cra.org) about other events others might consider relevant.
The numbers beneath the names of the presidents on the graph represent the percentage increase in funding for IT R&D through the presidents’ terms. The graph only goes out to FY 2003, but President Bush’s numbers don’t improve much for FY 2004 — about 3.0 percent, not much higher than the rate of inflation. It’s hard to know if a President Kerry would be able to manage anything different given the current budget constraints — ongoing costs for the war on terror, increased pressure to constrain domestic spending to address the defecit, resistance to increased taxes, and a appropriations process that continues to pit science funding head-to-head with funding for veterans and federal housing programs.