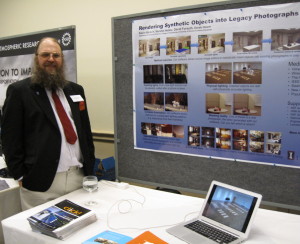 David Forsyth and his research display for CRA's booth

David Forsyth, University of Illinois Urbana Champaign, ably represented CRA last night at the Coalition for National Science Funding Science Exhibition on Capitol Hill. Featuring a poster and computer slideshow of his research on inserting synthetic objects into legacy photographs, David spoke to Congressional and Senate staff members, National Science Foundation employees, students and lobbyists who were all fascinated by his research and presentation.

Demonstrations of David’s research are available online as a video.

Three out of every four people who were asked to identify the real photograph from the computer-generated photograph were unable to correctly identify the real one. Many were intrigued by the possible applications of the research from the benign to the more sinister possibilities. Several said they would never look at a photograph the same way again. 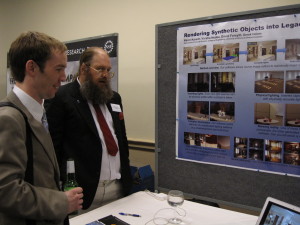 The Exhibition, an annual science fair for Congress and staff, had 35 booths manned by researchers representing universities and scientific societies featuring some of the important research funded by the National Science Foundation.