On Wednesday evening, the Coalition for National Science Funding (or CNSF) held their yearly Exhibition on Capitol Hill. The exhibition, probably best described as a science fair with some really smart people, is a showcase of research and education projects supported by the National Science Foundation. It gives a great venue to show members of Congress and Congressional staff what the American people have funded. 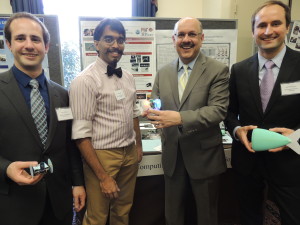 CRA, a member of CNSF, sponsored two grad students and a postdoc from MIT to come to Washington to talk about their work. Joseph DelPreto and Ankur Mehta talked about their printable robots; super cheap, 3D robots that can be printed on a 2D printer. Robert Katzschmann demonstrated his autonomous, self-contained soft robotic fish, which is considered a “soft robot”. Check out some demonstrations of his work in these two videos. All three young researchers are advised by Daniela Rus at MIT, who is also a CCC Council member. 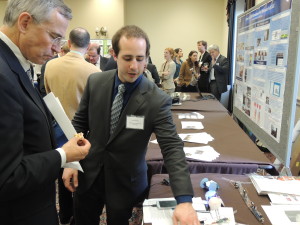 All of this research and work is supported from the CISE directorate at NSF. Both projects were well received by the attendees of the exhibition; in fact, two members of Congress stopped by their table, as did the head of the NSF CISE directorate, and multiple Congressional staffers and NSF employees. 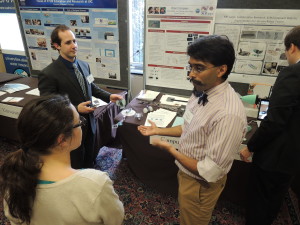 Ankur Mehta, center, of MIT, explains his printable robots to an attendee at the 2014 CNSF Exhibition.

A number of other organizations had tables and were showing off NSF funded research. From Tufts University’s “Engineering Solutions to Clean Water;” to the Entomological Society of America’s “Optimizing Crop Yields: Pollinators, Pests and Pathogens;” to American Psychological Association and Vanderbilt University’s joint table of “Russell the Robot: Engaging Children with Autism through Psychological and Engineering Research,” the event was a great display of the different types of research being supported by the Foundation. Click here to see a full list of participating organizations and what each exhibitor was presenting.

“Which would you rather have: more money or end of Sequestration?R... FIRST Act Marked Up By the Full House Science Committee
Scroll to top