CRA today filed comments with Senators Cory Gardner (R-CO) and Gary Peters (D-MI) urging the senators to put a priority on ensuring that fundamental research in the physical sciences, including computing, sees strong and sustainable growth as the senators work to build bipartisan consensus around a reauthorization of a key science policy bill. 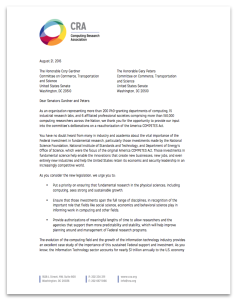 The senators are leading an effort for the Senate Commerce, Science and Transportation Committee to reauthorize the America COMPETES Act, a bill first passed in 2007 that signaled the Federal government’s commitment to increasing support for physical science research at the National Science Foundation, National Institute of Standards and Technology, and Department of Energy’s Office of Science. The committee solicited feedback from the science community as they begin their work on crafting a Senate version of COMPETES. A House version of the bill passed that chamber in May, despite concerns raised by CRA and other members of the science advocacy community about poor funding levels, prioritizations and policy decisions contained in the bill.

Our letter, signed by CRA Chair Susan Davidson, urges the senators to consider three recommendations when crafting their bill:

The letter then offers the case for Federal funding of computing research as an exemplar of the extraordinary benefit that Federal investment in fundamental research can yield, along with a warning that our leadership in IT isn’t a guarantee:

Our position as the world leader in information technology has clearly paid enormous dividends, but that position is not guaranteed. In many key sectors, including high-performance computing and new areas like ubiquitous computing that comprise the “Internet of Things,” the global competition has grown more fierce. We cannot afford to lose our leadership role.

The Federal investment in computing research is without question one of the best investments the Nation has ever made. The future is bright. There is tremendous opportunity – and tremendous need – for future breakthroughs. The Federal Government’s essential role in fostering these advances – in supporting fundamental research across fields – must continue.

The senators have held three briefings on topics related to innovation policy since announcing their efforts to reauthorize COMPETES. Their request for comment period ends today, so we expect to learn more about their approach very soon, with hopefully a bill produced by early Fall that could earn bipartisan support.