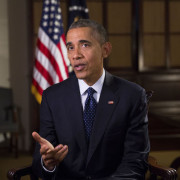 President Obama used his weekly radio address today to announce a new Computer Science Education initiative that would allow states to take the lead in increasing access to CS in K-12 classrooms. The initiative, which will be included in the President’s FY 2017 Budget Request to Congress on February 9th, will designate $4 billion for states available over 3 years, and $100 million directly for districts, to increase access to K-12 computer science education “by training teachers, expanding access to high-quality instructional materials, and building effective regional partnerships.” He will also direct NSF to spend more than $120 million over the next five years to support and train CS teachers.

The White House released a fact sheet describing the new initiative, called “Computer Science for All.” That the President would choose to highlight this in the run-up to the release of his final budget request to Congress is pretty huge news — I’m not sure CS has ever gotten quite this much Presidential visibility. But it’s a clear sign of the growing understanding in Washington of the importance of computing education.

“Our economy is rapidly shifting, and educators and business leaders are increasingly recognizing that CS is a ‘new basic’ skill necessary for economic opportunity and social mobility,” the President said in his remarks.

The plan would grant every state with a “well-designed strategy” for providing “Computer Science for All” funding from a $4 billion fund at the Department of Education. In addition to these state-level grants, the plan includes $100 million in competitive grants specifically “for leading districts to execute ambitious CS expansion efforts for all students, including traditionally underrepresented students and serve as models for national replication.”

With the funds, states and districts can train both existing and new teachers to teach CS, build regional collaborations, and expand access to high-quality learning materials and online learning options. They would also be encouraged to build robust collaborations with industry, non-profits, and out-of-school providers. And states are the real key to this effort. State governments have to take the lead (as many are already doing) in driving the efforts for their local districts. This Federal funding could provide much needed buttressing for those states with ongoing efforts and impetus for those states that haven’t yet ramped up their efforts.

The computing industry is already a big supporter of efforts to increase the viability of computer science education, including $23 million in investments in CS education support from Google, $75 million from Microsoft, support from Apple, Facebook, Salesforce.org, Qualcomm, and lots of other computing industry partners. And the efforts of non-profit groups like Code.org, ACM, NCWIT (and all of their corporate partners), along with the work of champions inside a range of Federal agencies like NSF, DOD, Education, the Patent and Trademark Office, the Corporation for National and Community Service, and Commerce have all been a big part of moving this effort forward.

It’s fortunate that the support for CS education is so broad and deep, as it’s likely that it will take a lot of additional effort to bring this plan to fruition. Despite the bipartisan recognition and support of the importance of computer science education, the legislative lift required to implement the funding called for in the initiative will be steep. But for those of us who believe that our students deserve a solid grounding in computer science education to compete in the new economy, it’s an effort worth making. So expect to see more on this issue from CRA in the coming weeks and months. And we’ll have more information about the nuts and bolts of the plan as we get it!

The announcement of the Computer Science for All Initiative has received a hugely positive reception from leaders in high-tech industry. We’ve collected a few notable statements below, and will continue to update this as more come in.