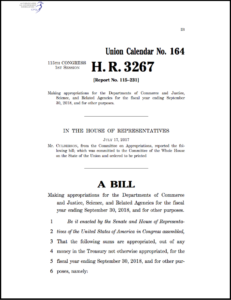 The good news first: both House and Senate appropriators roundly rejected the large cuts to NSF called for in the President’s budget request. President Trump’s budget requested cuts of $735 million to the agency in FY18, a 12 percent decrease from FY17, including a 10.3 percent decrease for the Computer and Information Science and Engineering (CISE) directorate. Fortunately, neither the House or Senate appropriations bill implements cuts on that scale.

The bad news is that neither bill would result in increases for the agency, either. The House treats NSF most “generously,” providing the agency with the same level of funding it received in FY 2017 (which is also the same it received in FY 2016). The rhetoric in the report accompanying the House version of the bill remains positive, suggesting the appropriators still believe in the importance of the investments in research:

The Committee believes that strategic investments in the physical science areas are vitally important for the United States to remain the global leader in innovation, productivity, economic growth, and good-paying jobs for the future.

However they argue there is just no room under the budget caps to provide additional funding (though there may be some reason for hope further in the process…more on that below).

Also noteworthy in the House report is that it doesn’t include directorate-by-directorate level funding recommendations, something that critics of NSF programs in the Social, Behavioral, and Economic sciences and climate research in the Geosciences — like House Science, Space, and Technology Committee Chair Lamar Smith (R-TX) — had argued for to allow for the de-prioritization of investments there. The House appropriators did include language similar to language Smith had championed about NSF only supporting “research in the national interest,” however the examples of “national interest” delineated in the report appear broad enough to alleviate most concerns.

The House also didn’t offer any specific directives regarding NSF’s indirect cost rates on grants — an issue facing the National Institutes of Health after the President’s budget request capped NIH’s Facilities and Administrative(F&A) rate at just 10 percent on its grants, a development that has lead to widespread concern on the part of the university research community. Instead, the House appropriators directed NSF to respond to a report by the General Accountability Office on the trend of increasing indirect cost rates.

The Senate appropriators also largely ignored the President’s requested levels for NSF. Instead, they called for a 2 percent cut to the agency’s research and education accounts. Under the Senate plan, NSF would see a decrease of $161 million overall compared to FY17 (but $658 million more than the President requested). The Research and Related Activities account would see a decrease of $115 million vs FY17, and the Education and Human Resources Account would see a $17.6 million decrease.

Senate appropriators also called out the importance of Federal investments in research, but were ultimately hamstrung by a budget allocation even lower than their House counterparts — the consequence of Congress failing as yet to come up with a Congressional Budget Resolution. Because neither chamber has agreed on top-line amounts for defense and non-defense discretionary spending, the two appropriations committees are playing with two slightly different pots of money, with the Senate CJS appropriators allocated about $1 billion less than their House counterparts for all the spending in their bill.

Of note in the report accompanying the Senate bill is a callout to the importance of High-Performance Computing at NSF, directing NSF to “remain committed to developing systems that facilitate tremendous leaps in computational simulation and data analyses that enable a broad range of scientific research.” The committee also directed NSF to fund research in cybersecurity at no less than the FY 2017 rate.

The next step for both bills in theory is consideration on the floor of their respective chambers. However, it’s possible that neither bill gets finished before the end of the fiscal year and a compromise version gets worked out between the House and Senate and included in an omnibus appropriations package. What happens in that scenario is anyone’s guess. Key to the final funding numbers will be whether Congress reaches agreement on an overall spending number. Spending for FY 2018 is subject to the budget agreement spelled out in the Budget Control Act of 2011 — the Act that brought us the Sequester — and that spending level is objectionable to a majority of members of Congress. For those on the right, the BCA unduly limits defense spending. On the left, the concern is non-defense investments. An agreement to amend the BCA caps could result in increased limits to both defense and non-defense accounts. In that scenario, the appropriations chairs in both chambers have indicated that they’d place a priority on seeing NSF receive an increase. However, a failure to reach an agreement, or an agreement that only boosts defense spending at the expense of non-defense spending, could result in final numbers for NSF that are lower than either the current House or Senate plan.

As always, we’ll continue to monitor the process, and we’ll have lots of additional information on other key science agencies in the appropriations process in the days ahead.

This is a good opportunity to remind you that CRA’s next Congressional Fall Fly-In is September 12-13, 2017! This is a great opportunity for representatives of CRA’s member institutions to come to DC and help make the case for the importance of the Federal investment in computing research — and given the current state of appropriations, it will likely be well-timed. Join us (and sign up before Aug 4th to get the discounted hotel rate)!