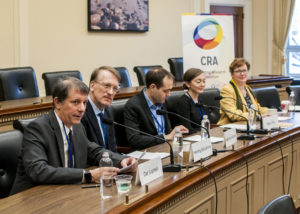 On a day when President Donald J. Trump is expected to use his State of the Union address to unveil his administration’s plans for nationwide infrastructure investment, a panel representing computing researchers in academia and industry told a group of congressional staffers and other stakeholders that while those infrastructure needs are critical, it would be shortsighted to simply replicate more of what we have. Instead, they urged, now we have an opportunity to invest in the research and make progress on the policies that would allow for an “intelligent infrastructure” that would provide a foundation for increased safety and resilience, improved efficiencies and civic services, and broader economic opportunities and job growth.

The panel —  led by moderator Dan Lopresti, Chair of the Department of Computer Science at Lehigh University, along with Henning Schulzrinne of Columbia (and former CTO of the Federal Communication Commission); Matt Wansley, General Counsel for nuTonomy, a startup focused on autonomous vehicle technologies; Nadya Bliss, the Director of the Global Security Institute at Arizona State; and Beth Mynatt, Director of the Institute for People and Technology at Georgia Tech — highlighted the promise of the technologies that will enable more intelligent infrastructures, but also noted critical gaps and barriers to successful deployments. The briefing was sponsored by CRA, along with honorary co-hosts Rep. Lamar Smith (R-TX), Chair of the House Science, Space and Technology Committee, and Rep. Eddie Bernice Johnson (D-TX), Ranking Member of the House Science, Space and Technology Committee. 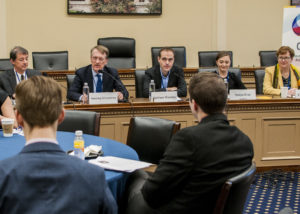 Henning Schulzrinne, of Columbia University, addresses the attendees of the Capitol Hill briefing.

Intelligent infrastructure is the deep embedding of sensing, computing, and communications capabilities into traditional urban and rural physical infrastructures such as roads, buildings, bridges, pipelines, water and electric distribution systems for the purpose of increasing efficiency, resiliency, and safety. Intelligent infrastructure has a wide range of applications, including transportation, energy management, public safety and security, disaster response, agriculture, and health.

“The scope of the transformation we are facing is truly unprecedented,” Lopresti noted. “It’s hard to find proper comparisons, but intelligent infrastructure is likely to have an impact on our society comparable to the establishment of the national electrical grid in the 1930s, the interstate highway system in the 1950s, and the Internet in the 1960s. Indeed, intelligent infrastructure can be viewed as the convergence of these three very powerful ideas.” 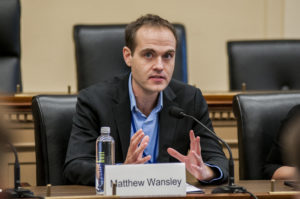 Matt Wansley, of the company nuTonomy, addressed issues of robustness and interoperability.

But the panel pointed out a rich set of research problems that require solving to truly realize the benefits of intelligent infrastructures along four foundational areas. Schulzrinne discussed the need for resiliency and adaptability in these sorts of systems, the ability of the infrastructure to cope with extreme or unexpected circumstances — for example, when wireless communications are subject to natural disasters on the scope of Hurricane Maria that devastated Puerto Rico. He noted the lessons we are learning from Maria — which knocked out 95 percent of all cell sites and many telephone switches — point to the need for more resilient communications infrastructures. “Research is needed to develop and prototype novel networking architectures that support a minimal level of communications, for example, using pre-deployed mesh and opportunistic solar-powered store-and-forward networks, for both first responders and the public. Self-configuring ‘autonomic’ networks can recover capabilities without the need for experts.”

Wansley added an industry perspective to the discussion, noting the importance of solving problems of robustness and interoperability to successful deployments of vehicle-to-infrastructure (V2I) communications that would add tremendous value to communities with autonomous vehicles. V2I would not only enable autonomous cars to pull information from the existing infrastructure — the color of the traffic signal, the state of traffic ahead, the extent of construction zones on the route — but also push it back into the infrastructure for the benefit of all users. “Intelligent infrastructure is a textbook example of a positive externality,” he said. But getting there will require that the companies developing autonomous vehicles, and the consumers who ride in them, must be able to rely on the infrastructure — and that will require more fundamental work in the understanding how to build in robustness and interoperability in these system. This is work that’s perhaps best suited to university-led research fueled by Federal investment, he noted, as there are not sufficient market incentives for large corporations to make such V2I networks open and usable widely. 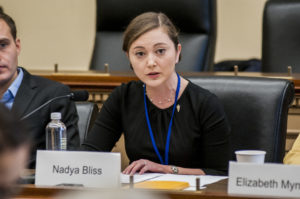 This need for access and usability was amplified by Mynatt, who noted that ensuring the availability of open and curated data produced by these systems is key to communities benefitting from them (and not just industry). “Too often the data collected by these systems, whether it’s from smart trashcans that know they are full, to traffic data at intersections, is held by that company,” she said. “While municipalities may gain specific capabilities, such as knowing when to empty the trash, they lose the opportunities to use the data in new ways, ranging from informing real estate development to public health. Many of these ‘secondary uses’ of data are not in the bailiwick of technology companies but stand to make profound contributions to the quality of life in these communities.”

In addition to forward looking data platforms and policies to spur open innovation, Mynatt also discussed two other gaps that stand to prevent communities from reaping the economic rewards of infrastructure investments: productive access to broadband capabilities and innovating systems for effective training and job creation. She noted that broadband access in rural communities is often constrained by last mile problems, which might be met by combining wired and wireless connectivity. Similarly, meeting the needs of rural agriculture might require “flipping the cloud”, recognizing that agricultural users are not simply consumers of content, but potentially generate large volumes of data about their own farms, which might best be addressed by having more computation available to them on the “edges” of the internet nearest them, rather than pushed back up to some central cloud through a constrained pipe. These challenges also highlight the need to have a workforce trained to work with (and on) these new infrastructures. 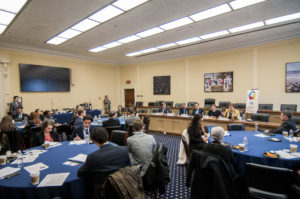 Elizabeth Mynatt, of Georgia Tech, addresses the attendees of the Capitol Hill briefing.

Trustworthiness, security and privacy are challenges for just about any deployment of intelligent infrastructure, and Bliss discussed a number of potential approaches to meeting those challenges — like homomorphic encryption and differential privacy —  that are or will become viable with research. But she was emphatic that if policymakers take to heart only one thing from her talk, let it be “security can no longer be an afterthought.”

“Investment in intelligent infrastructure creates much opportunity for our nation,” she said. “As we build this new internet of useful things, we can build in security, trustworthiness, and privacy from the start. The cost of not doing so given the physical nature of these systems (vehicles, energy plants, bridges, roads) would just be too high.” 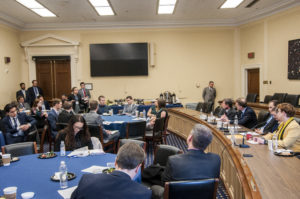 An attendee of the Congressional briefing poses a question to the panel.

Common across all the panelist’s presentations was a recognition that the infrastructure for handling, processing, and analyzing data is crucial. “At the same time, there is a tension between data privacy, integrity, and openness that we do not yet know how to navigate,” Lopresti said. “We need more research, and more infrastructure that enables that research, to solve these challenges.” He also noted that the nation is well-positioned to take on this research. Indeed, more than a dozen Federal agencies are already supporting work in these areas. These include NSF, NIST, the Department of Homeland Security, Department of Energy, and the Department of Transportation. “But also the Department of Defense, Health and Human Services, the US Geological Survey, and even the Census Bureau. Bolstering support for intelligent infrastructure research through these Federal funding agencies will reap enormous dividends.”

The briefing was well-attended and generated good discussion both in the question and answer period and in follow-up conversations with congressional staff. We’ll keep you apprised of developments as the Administration’s infrastructure proposal begins its march through the legislative process.

In the meantime, you can read the “one-pager” from the briefing, or check out some additional resources, including white papers produced by the computing community on various aspects of intelligent infrastructure research.

Invalid or expired token.
Shut down ends but will we be back here in February? Budget Deal for FY18 and FY19 In Sight; Waiting for it to Cross the Finish ...
Scroll to top